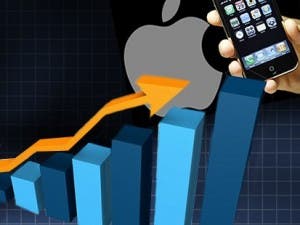 Apple have set another outstanding quarter with reported revenue of $24.67 billion and a net profit of $5.99 billion.
While the success of the iPad 2 and U.S iPhone profits growing by %150 are partial thanks to Apples latest success, China and Asia is where the technology giant is seeing the greatest gains.

Sales for the iPhone 4 in China, where Cook describes Apple as being ‘on a tear’, grew by %250, creating $5 billion in revenue alone!

As expected with such a strong demand, Apple have been giving China some extra special attention to try to understand the new market properly and develop products that suit the environment, this has sparked rumors that Apple may start selling pre-paid versions of the iPhone 4, as pre-paid is the only way to have a phone here. A pre-paid iPhone would likely be popular in other regions too creating more interest in the already popular company.

It was also announced that Apple will receive it’s billionth customer, and that a new store almost ready to be opened in China.