Longwin Digital launched this rather thin (9.9mm) Lonpad tablet earlier this week, which features a powerful Cortex A9 CPU coupled with a Mali-400 GPU. RAM is 512Mb and the system runs Android 2.2.

The usual plugs and slots are all there including HDMI, Micro USB and Micro SD card reader, 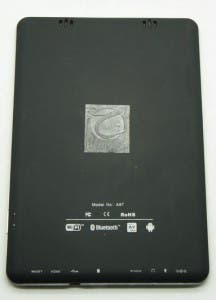 The Back is covered in a Rather nice rubber feel coating which really helps grip the thin 7 inch tablet.

Longwin have decided to spec the Lonpad with a 7-inch (800 x 600) Piezo touch-screen which seems to be a bit of an odd idea, but the choice does seem to have brought the price of the device down to a respectable $150!