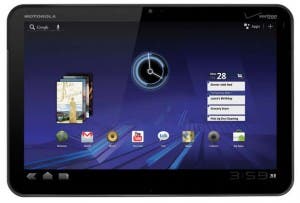 Motorola have recently been showing off their huge losses for the year, while also proudly(?) stating that they have managed to ship a lackluster 250,000 Xoom Android Tablets, only 100,000 of which have found loving homes!

We can’t help but blame the rather poor sales on the silly price tag attached to the 10 inch Honeycomb tablet, the fact that the iPad is actually cheaper, thats with the included ‘Apple Tax’ really give consumers food for thought when looking at the advanced Moto tablet.

Oh, and as with everything in the rapidly changing technology world the Xoom isn’t any more advanced today as the Eee Pad transforming tablet, which gets the exact same specification as the Xoom but at a 2/3 the price!

With poor sales in the west, and with Apple posting record profits in China, it looks like Motorola are hoping to gain some ground with a Xoom launch here, but look at that price!

Good-bye Motorola Xoom you we’re once the top of your league, albeit for a rather short time.

Previous White iPhone 4 Is Fatter Than The Original

Next Motorola Xoom and Atrix Coming To China With Silly Pricing