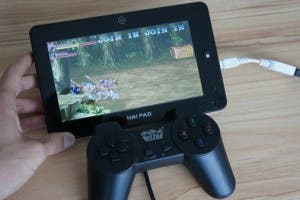 This is one of those time when we hear ourselves saying “Why haven’t we seen one of these long before now?” The 7 inch screened Android running HaiPad is now being marketed as a portable gaming device/home console. 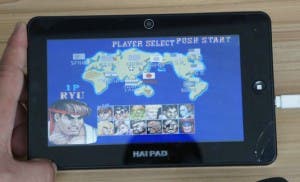 The 400gram Haipad M7 tablet has more than enough grunt for gaming thanks to it’s 1Ghz Samsung CPU with accompanying 512Mb RAM. There is also plenty of room for gaming ROMs also (for 8 and 16 bit roms anyway) with the built in internal 4Gb of Flash NAND memory, and if that’s not enough there is a micro SD card reader built in too. 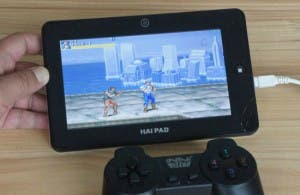 Games can be controlled by either using touch input on the 800 x 400 capacitive touch screen, or via a Playstation style joypad which can be plugged in to the micro USB port.

For those times when your not whittling away the hours playing some old school Super Mario or even a bit of Resident Evil using the excellent Playstation emulator for Android, you can use the HaiPad as a video chat device thanks to the built in front camera, do a bit of ebook reading, browse the web or even reply to the odd email just as you would on any Android 2.2 tablet.

The HaiPad is out now with prices varying from 850 Yuan to 1150 Yuan depending on where you shop.

Next iPad 2 Sold Out In China Within 4 Hours!