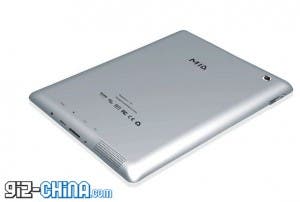 We’ve been waiting with baited breath for the arrival of an iPad 2 imitation and the wait seems like it will be finally over next month when this beauty arrives on the scene.

Huadian, the makers of this tablet, claim that their iPad 2 wannabe will measure in at the same thickness as the Apple version (8.8mm) and will feature a body constructed of alloy and will get a glossy 9.7 inch 1024 x 768 capacitive screen.

We have only been made privy to what the back of the device will look like (in the above image)  but from what we can see Huadian have done a great job of mimicking the hugely popular iPad 2.

Huadian, have been tight lipped on the full specification, but have let slip that the iPad 2 clone will get an AMLogic CPU running at 800Mhz, with 512mb RAM and 8Gb of internal Flash storage.

They have also stated that the tablet will also get a front and rear facing cameras, GPS and Wi-fi!!

Not only does this clone look great, but if it does in fact get the GPS and cameras, Huadian, could be one of the first Chinese manufactures to truly step the Chinese tablet up to the next level!