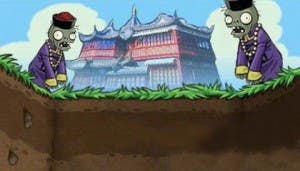 PopCap CEO has announced a Chinese language version of Plants Vs. Zombies is heading to China, but also let slip a few more details including the much anticipated launch of the Android version of PVZ!

PopCaps Plants Vs. Zombies game has been available for a few years now, but despite the age of the game has continued to rank as one of the most popular games available on Apple’s App store.
Although designed for English speaking markets, Plants Vs. Zombies has found a huge fan base in China with an estimated 100 million downloads.

To try and cash in on the Chinese market and also to try and slow bootleg and copied versions of the popular game, PopCap have announced that a new version of Plants Vs Zombies will be released in Chinese later this year and will feature slightly different game play.

As well as the paid for version of POV available on the Apple App store, PopCap have also teamed up with RenRen (Chinese Facebook) to offer a free social networking version of the game, this marks the first time ever PVZ has been offered on any social network site.

The best news of all, however, if the news that Lenovo will be pre-installing PVZ on it’s Lenovo LePad, and Android tablet, meaning the wait is nearly over for the Android version of our favorite Zombie game!

Previous If Dr. Seuss Made A Tablet It Would Be The Doolax

Next Will Oppp’s First Android Phone Be A Meizu M9 Clone?