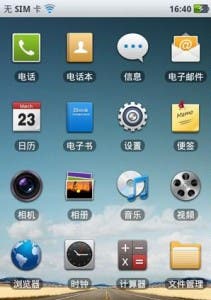 Although China’s Oppo electronics brand is one of the largest and most popular makers of well priced MP3, MP4 and fashion phones, I think this is the first time we have posted news about the company here on Gizchina!

So what warrant such an honor! Well these screens shots are the reason along with the leaked pricing and specification details of Oppo’s first Android smart phone.

As you can see from the screen shots the Android UI has been given a rather tasteful makeover. In fact it almost looks as good and the Meizu M9 UI! Let’s take a look at them together…

The Oppo X903, Android smart phone is getting a pretty impressive hardware specification too with parts coming from electronics giants Hitachi and Qualcomm. Hitachi will supply the 3.97 inch IPS screen which Qualcomm are providing 1Ghz Snapdragon CPU’s!
There will also be a 5 mega-pixel camera and the O.S will be Android 2.2.

Pricing is pretty ambitious though will the Oppo X903 expected to ship at a whopping 4399 Yuan! That’s only 700 Yuan cheaper than an iPhone 4! And nearly double the price of the Meizu M9!

Although details of the hardware, UI and pricing and have been leaked, no details have surfaced as to how this Chinese super phone will look! It will be interesting to see how Oppo will go with the design, will they go the clone route? Or will they release something truly unique?