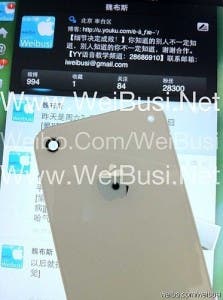 We don’t know just how genuine this leak is but it does show the position of the flash in the same area as found on some of the supposed iPhone 5 cases that have been available online in China over the past few months.

Take a look at the blog here where the photo was originally posted.

Next China’s First Affordable ‘Got it all’ Tablet Arrives: 3G, GPS and Camera for $200