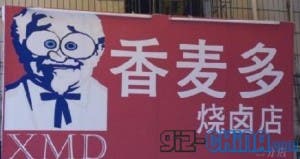 So what can small business owners do? Create counterfeit Western stores seems to be the answer!

Coffee is becoming increasingly popular in China, so it’s no wonder that fake Starbucks have sprung up in every major city. Some of our favourites are: 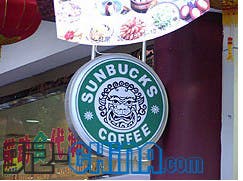 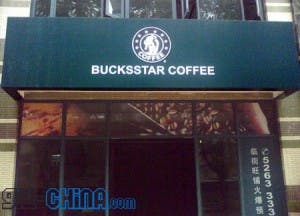 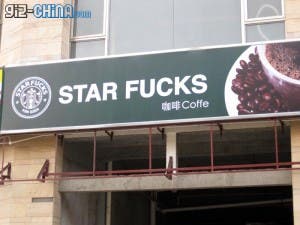 and of course the classic Starfucks!

McDonalds isn’t as popular in China as KFC (see later in the list), but that hasn’t stopped clever unimaginative entrepreneurs copying the famous fast food brand. 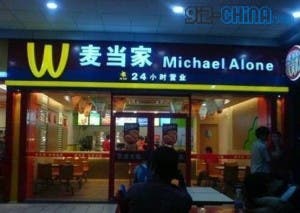 This fake McDonalds spotted in China has got the ‘golden arches‘ upside down and the rather strange name “Micheal Along”, which could relate to a the band “Micheal Learns to Rock” who headed the pop charts in China a few years ago for what seemed like an eternity!

3. Numerous Fake KFC’s all over China!

KFC is the undisputed fast food king in China, and all manner of KFC ‘inspired’ clones have hatched all over the place.

However looking at the initials on some of these fake KFC, it would be difficult to tell what fast food, or fast service they may offer!

XMD? And look at the Colonel’s eyes! Perhaps they provided some sort of drive-thru full body cavity search? 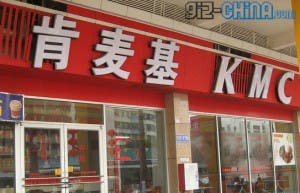 KMC? Kentucky Mango Cat? King Mao’s Cat? If you can think of a better one leave it in the comments. 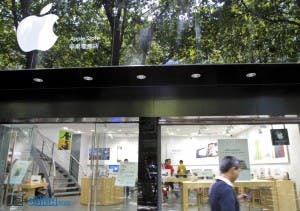 The fake Apple stores which seem to be opening every 5 minutes here in China, are actually well designed nice stores. 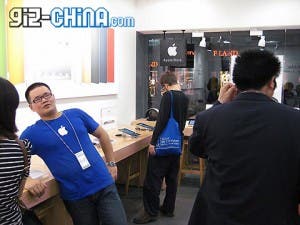 The staff have nice uniforms and are friendly enough to Jailbreak your iPhone or iPad if you bung them a few 10o Yuan, but their ballsyness knows no bounds when it comes to claiming how ‘official’ they are. 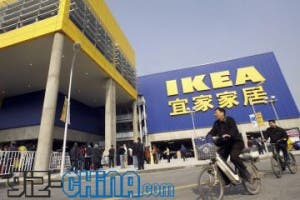 The fake Ikea store located in Kunming get’s to the number one spot on our list of top fake stores in China due to its unashamed cloning and sheer size! 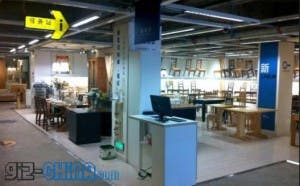 The store is huge, painted blue, called Ikea and is filled with cheap good looking home furnishings! Are the real Ikea even sure this is a fake store?

Previous The End of Blackberry is Nigh!

Next Move Over GooApple The ZhouPhone Android iPhone 4 Knock-Off is Here!