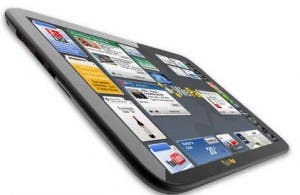 When the iPad had it’s Keynote we all pretended we were surprised by the lack of functions. We all ‘poo poo’d’ at the ugly dongles needed for expansion and ‘tut tutted’ at the missing web cam, but secretly we all knew this would be the case for this is ‘Apple’! The company who constantly toes the ‘If we don’t want it to be compatible it won’t be!’ line.
Thankfully the iPad has finally ushered in the tablet era and managed in getting the devices in to the mainstream. Without Apple and the iPad, tablet computers would still be stuff of dreams and science fiction movies to all but the most tech savvy geeks.
This is all well a good, but what if you wanted a tablet that had all the iPad’s ‘Missing’ features now, without having to wait for the 2nd generation model?
How about taking a look at the WePad? Other than sounding like an amalgamation of a Nintendo Wii and the iPad, or the name for a new brand of incontinent pant, the WePad promises everything the iPad naysayers claim to need.

Join GizChina on Telegram
A camera! Awesome so we don’t have to reach for that iPhone when taking snaps…. Two USB plugs! We can see how these might be useful. An SD card reader! Ok, this would certainly make for a more productive tablet.
Google’s Android comes pre installed on the WePad, which probably means you’ll have fully functioning Bluetooth, something which both the iPhone and iPad don’t have, this would open up tethering possibilities to either GPS units (if one isn’t built in) and to car or home stereo’s.
The only two areas that really let it down in comparison to the iPad is in battery life, which is a claimed 6 hours instead of the iPads 10, and the fact the iPad is a confirmed launch, where as the WePad isn’t!
We would certainly love to see a head to head between the two devices, if only to give Apple a bit of a shove in the right direction for the iPad 2.
Read Also:  Rumors: Apple's AR/VR headset will cost more than $2,000

Next CutePad Android Tablet Is a Feature Packed Bargain