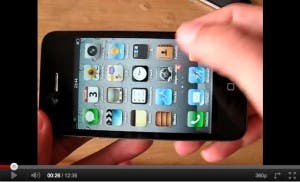 GooApple have quietly launched their latest generation Android smartphone, the GooApple V5! Like the previous GooApple and GooApple 3G, this 3rd generation GooApple has the iPhone 4 external appearance, but with an Android powered O.S.

Update: Pricing and where to buy details!

Check out the exclusive GooApple V5 Hands on Video after the jump!

Just as the iPhone 4S skipped the makeover to settle for hardware updates, the GooApple V5 looks identical to it’s earlier versions, but has had some great hardware improvements added.

The new GooApple V5 features a Retina-like display with a resolution of 960 x 640! That’s the same as the iPhone 4 and iPhone 4S and almost double the pixel density of the previous GooApple 3G.

Watch the First Hands on video with the GooApple V5!

You’ll be amazed at how much like the real iPhone 4 and iPhone 4S the GooApple V5 is! Watch Shine Wong’s exclusive hands on video!

As well as the improved Retina display and updated rear camera, the GooApple V5 also sport a real stand alone GPS, 3G (which works on most countries 3G networks), Wi-Fi, replaceable batter and a 16GB or 32Gb of internal memory!

Where to buy the GooApple V5?

If you like me, want to get your hands on this fantastic Android powered iPhone 4S replica phone with Retina display head over to Android-sale.com the official reseller of GooApple! Prices start at $279.99!