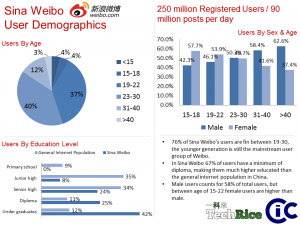 The demographic of Chinese using Weibo, the Twitter-like platform, are mainly 19-30 year olds (76%), with more than half of users (%58) being male, and %67 holding at least diploma.

Rumor are now circulating that Sina will restructure and Sina Weibo will become a wholly-owned subsidiary of Sina Corp.

Full coverage of Sina Weibo’s amazing achievement and restructure news can be read over on Sunny Ye’s post on Techrice.com