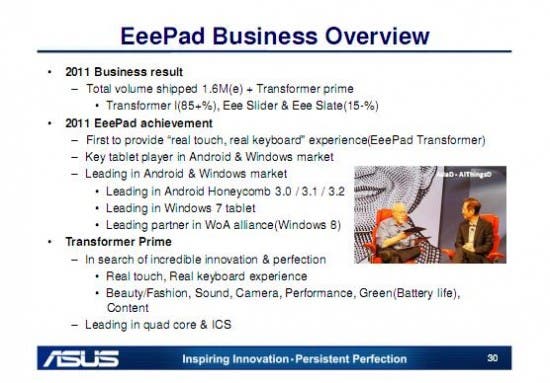 The Asus Transformer Prime Android slate isn’t the only thing that Asus can’t keep a secret at the moment. I leaked document from the Taiwanese electronics giant has also turned up with details of the companies tablet plans for the coming year.

The first tantelising item is that the Transfromer Prime is expected to arrive in stores 9th November, so you can have yourself some brushed alloy tablet fun this Christmas!

There are also plans for a few more Android vaiations of the Eee Pad planned on the horizon too, but more interestingly is the mention of Windows 8 Eee Pads which are under development, but don’t expect to see them in stores for at least another year!

Via: Ubergizmo and Netbooknews

Next Xiaomi CEO Lei Jun Wants To Take On Apple!