Reports from Taiwan suggest that Apple are planning to shake up iPad pricing when the company introduces the new iPad 3 models later this year.

As we have already reported, it is looking likely Apple will release 2 new models of iPad this year, while keeping the current iPad 2 in production as a low cost iPad alternative.

The low cost iPad is likely to be the current iPad 2, but perhaps only available as a Wi-Fi only 16GB version in black.

The mid and high end iPads will be new for 2012 iPad 3’s, both of which will run Apple latest Apple A6 CPU, which is likely to be a Quad Core unit. The differences between the 2 iPad 3’s other than price are not known, but it has been suggest that the mid range model will have the same resolution screen as the iPad 2, while the more expensive iPad 3 will get a high resolution 2048 x 1536 screen.

If Apple were to drop prices to below $300, non Apple tablets such as the Amazon Kindle could see their market share decrease as consumers move to the new lower priced Apple hardware.

I have just received an email asking “do you really believe that?” it’s a good question so here’s my answer.

A few years ago when Apple launched the iPad, many people thought it was overpriced and they could easily match of beat it. It took over a year for the competition to get their tablets down to the same prices as Apple (sure Apple had literally bought all supplies of screen).

Now a few years on component prices are lower and Apple are making even more money on their App stores (with a Game store on the way) which could easily cover profits and a lower priced iPad. 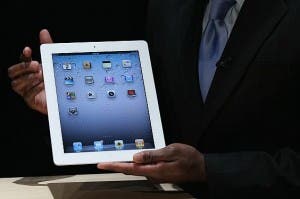 In theory Apple could drop the iPad 2 to $299 and still make money through app sales alone. Further more hackers have yet to Jailbreak the iPad 2 so Apple don’t currently need to worry about pirated apps eating their profits.

Other possibilities for an iPad price drop to $299 could be that the iPad is going to replace the iPod? There wasn’t an update last time around (other than a white option).

Then there is the considerable presence Amazon and similar Android tablet makers are having on the lower priced tablet markets, which cannot have gone unnoticed by Apple.

While $299 is cheap possibly too cheap, in theory Apple could drop iPad prices to the $299 only time will tell if they do.

It’s not impossible for Apple to reduce prices to $299 is it?

Thanks to Seth for the email.