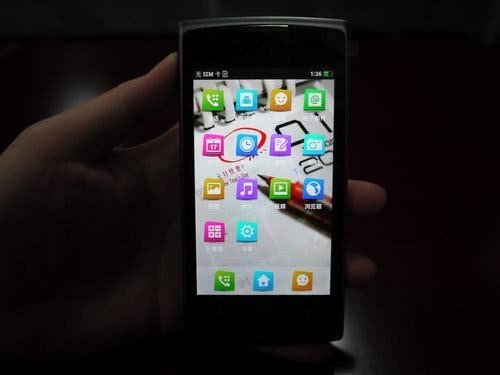 The Oppo Real name has been used on Oppo’s phones before, but this is the first time the company have produced an Android phone with touchscreen using the Real name.

With the change of UI and design, Oppo have also changed their target audience for the Real range of Android phones. Oppo now intend to target younger users who enjoy being out and about, listening to music, gaming, sharing photos and keeping up to date with their friends through Weibo, QQ and possibly Facebook and Twitter in the U.S and Europe.

The Oppo Real doesn’t feature the same top of the range features as the new Oppo Find 3, and actually has a specification very similar to the Xiaomi M1.

The CPU is a Qualcomm MSM8255T 1.4GHz, and there is is 512mb RAM and 4GB of built in storage. The rear camera is an 8 mega-pixel unit while the front is a 2 mega-pixel camera. In fact the cameras are the same as those found on the Find 3, so expect some great photos from the Oppo Real!.

The UI of the Real is much more colourful and youthful than that of the Find 3, but expect many of the same Android functions from both phones.

There is no word on price for the Oppo Real, but judging by the specification and the intended audience, Oppo will likely price the Real to compete with Meizu’s MX at roughly 2999 Yuan ($476)