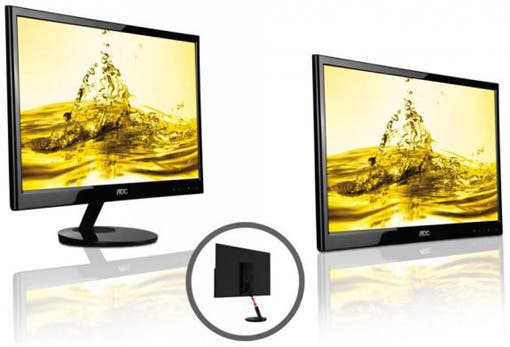 Typically LED computer monitors tend to run off of main power, and are connected to your PC Via a display plug of some sort, however with AOC’s new 22-inch LED display this is all going to change as all it requires is a single USB.

AOC’s new 22-inch monitor, which is going to be launched at this years CES (CES 2012) only requires one USB plug to recieve all the power it needs to run along with the signal to display whatever you’re working on/playing on.

Not only is the the e2251Fwu LED monitor from AOC energy efficient, but the company have also gone on to use recycled materials in the construction of the hardware!

So if you have $199 you won’t to spend on a new monitor which is friendlier to the environment the e2251Fwu AOC USB 22-inch monitor maybe the screen for you!

Fremont, Calif.  – January 4, 2012– AOC, the worldwide leader in HD television and monitor display technology, announces the 22-inch USB Monitor, a sleek full high definition LED monitor that receives both power and signal solely through USB connection.  The energy-efficient and affordable 22-inch USB Monitor (e2251Fwu) offers simple plug-and-play connectivity, making the productivity benefits of dual- and multi-monitor computing available to the masses. The e2251Fwu is equally suitable for business, gaming and entertainment use with its convenient built-in USB port and excellent image quality. A great productivity enhancement for anyone who runs multiple applications, the 22-inch AOC USB Monitor will be available for $199 at national retailers in February 2012. The e2251Fwu will also be showcased at the Bellagio, Monet 3 Ballroom, at the International CES 2012, January 10-13, 2012.

With the launch of the e2251Fwu, AOC continues its commitment to providing the latest in digital display technologies and innovative styling. The 22-inch USB Monitor is ultra-light and super slim, measuring only 10.6 mm thin. The LED-backlit LCD monitor offers excellent image quality for movies and gaming with Full HD 1080p resolution, 20,000,000:1 Dynamic Contrast Ratio, 200cd/m2 brightness and 5ms response time. Thanks to the LED backlight, the e2251Fwu consumes 50 percent less energy than many CCFL backlit monitors.  The monitor also features a removable stand that allows it to instantly transform into a digital photo frame or presentation display. Due to its minimal weight, the e2251Fwu can be moved around effortlessly, while the large display and wide viewing angles allow several viewers to see a great picture, making it a perfect tool for client meetings and business presentations.

Every AOC monitor is manufactured to meet the most stringent green standards. Along with being mercury free, the packaging for the eco-friendly 22-inch USB Monitor is made from recycled materials. In addition, AOC’s industry-leading LED display technology allows for a powerful and crystal clear display while minimizing power consumption.

Enabled by a DisplayLink chip, the AOC 22-inch USB Monitor’s technology easily integrates with existing desktop / notebook environments and is supported on all leading operating systems including Windows XP / Vista / Windows 7 & Apple MAC OSX Tiger / Leopard and Lion. Linux support is also available through many of the standard distributions.