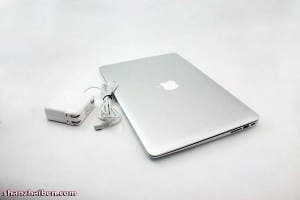 2011 was a year flooded in tablets all running Android OS, but the one device which will stick with us from China in 2011 is this fantastic knock off Macbook Air!We’ve reported on this Macbook Air clone on a number of times, but with new images of the $499 ultrabook just released, we couldn’t resist posting it again.

Actually speaking of price, $499 is the price you would be expected to pay if you were to buy one of these ultra thin laptops from dealer selling to foreign markets, if you were to source one locally in China you could pay closer to $260!

The looks of this MBA 13.3 inch knock-off are nearly spot on, even down to the Magsafe style charger, but it’s not all looks, as the hardware is pretty good too.

We can only imagine what the quality of Chinese Apple knock-offs will be for 2012!