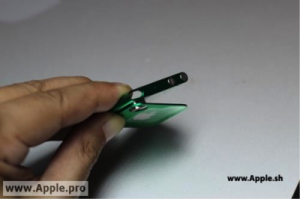 Is the iPod Nano getting it’s camera back, or is this just another long forgotten Apple prototype resurfacing?

The iPod Nano has undertaken some drastic design changes in it’s time, with the last major overhaul seeing the Apple MP3 player morph in to a small square media device with tiny touchscreen and iOS style user interface, however all these updates came at the expense of the small built in camera.

Images of a 7th generation iPod Nano with camera have been first appeared almost a year ago, and it looks as though the prototype has resurfaced.

These new images show that the Nano’s clip will have a cutaway so that is doesn’t over the 1.3 mega-pixel camera.

It is claimed by a Foxconn source that the camera equipped Nano is almost ready for production, but Apple are still trying to improve the quality of the images.

If these rumors turn to be true, let’s hope Apple are also working on an iPod Touch camera update too!

Next iPad 3 Knock Off with Android ICS Available in China