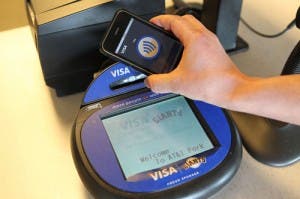 Mastercard has neither confirmed or denied the rumor, which has been reported in the Chinese press, but the chances of the next iPhone supporting NFC. or Near Field Communication technology are pretty high.

Rumors of an NFC enabled iPhone have been doing the rounds ever since last year with hopes that the iPhone 4S would get the technology which enables users to pay for goods using their smartphones.