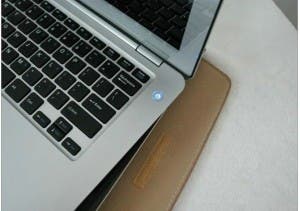 Now that the iPad 3, sorry New iPad rumors have finally been put to rest we can now start on speculating about other Apple products one of which is the new Macbook Pro with Macbook Air design, but it looks like you don’t need to wait for Apple to launch one.

Rumors of Apple updating the Macbook Pro range of laptops to a much thinner and lighter design have many Apple users very excited. The prospect of having all the power of a Pro but in a lighter form factor is really appealing, especially to those who carry their laptop to and from the office and crave a lighter load.

We’ll if you are fed up of waiting for Apple to launch a Macbook Pro Air, you could always head to the ever creative Chinese electronics markets, where Air/Pro mashup laptops are currently on sale!

Unlike genuine Apple Macbook Pro’s and Airs, this knock off Apple is made of plastic rather than brushed alloy, but you do still get the iconic light up Apple logo on your super tapered portable computer.

Prices are very cheap, $200, but as you would expect you won’t be getting Mac OSX on here, and the battery life is only good for a few hours.

Previous How to Install HoneyCombMOD Uberoid On Your Android Tablet

Next Chinese manufacturer takes a crack at the Galaxy Note knock off!