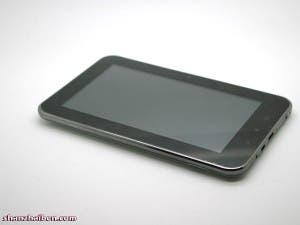 The Samsung Galaxy Note has received so much attention for it’s “is it a big phone or a small tablet looks” that Chinese Android tablet makers have begun to make their own versions (read clones) of the Korea device.

The knock off Galaxy Note is slightly wider than the real machine, probably due to price restrictions on smaller high resolution screens, but the rest of the package comes quite close to the Galaxy Note in looks and feel.

The rear of the clone get’s the same textured finish as the real Note, as you can see below in the gallery, and the thickness of the Android handheld is the same.

As for hardware this knock off Note has opted to use the latest Allwinner A10 CPU, which provides plenty of power while being an extremely low cost chip to produce. In this case the CPU is running at an impressive (for shanzhai devices) 1.5Ghz, and there is a Mali 400 GPU on board to help with graphics and 512Mb RAM.


The screen, as mentioned above is larger than the Galaxy Note’s unit, and measures 7 inches with a resolution of  800 x 480, but the overall thickness of the device is just 9.8mm.

Android 2.3 comes as standard on the Note clone, but an Android 4.0.3 update is in the works.

Next iPad 4G Unlikely to Launch in China?