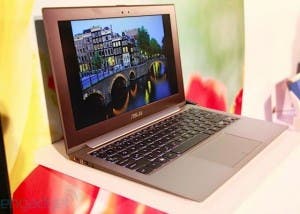 Asus have 2 new ultrabooks ready for an imminent launch. Both the 11.6 inch and 13.3 inch ultrabook models will be known as Zenbook Primes and Engadget Chinese managed to get an early look at them.Following on from the previous generation Asus Zenbook both of the new ultrabook models get the same all alloy construction, but now both feature HD IPS screens with a resolution of 1920 x 1080 non glare screens.