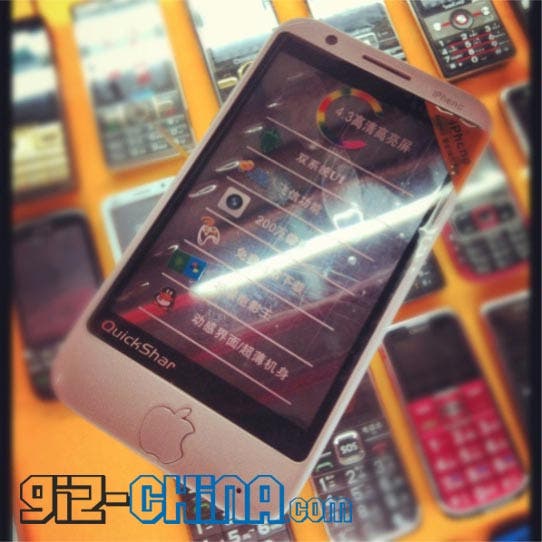 Just this weekend we were discussing how much better a larger screened iPhone 5 would be received, so imagine our surprise when we came across this 4.3 inch screened new iPhone knock off running Android OS!When we have a few hours spare we often head over to the local phone city which is an Aladdin’s cave of smartphone rarities, bargains and unusual knock off devices.

This iPhone 5 knock off was spotted in between freshly imported HTC One phones and the hundreds of Samsung Galaxy Note’s which have become popular here in China.

In true Shanzhai (fake local good) style this 4.3 inch Android powered iPhone 5 knock off had some rather questionable styling and design choices such as the Apple shaped home button and the badly spelt iPhenc name.

According to the specifications this fake new iPhone boasts a 4.3 inch touch screen, Android UI (which could mean a fake Android OS based on a JAVA OS), 2 mega-pixel rear camera with LED flash, plus a front camera.

Pricing for this knock off iPhone 5 is 550 Yuan  (less than $100) but I have a feeling you could get it much cheaper possibly around the 300 mark!