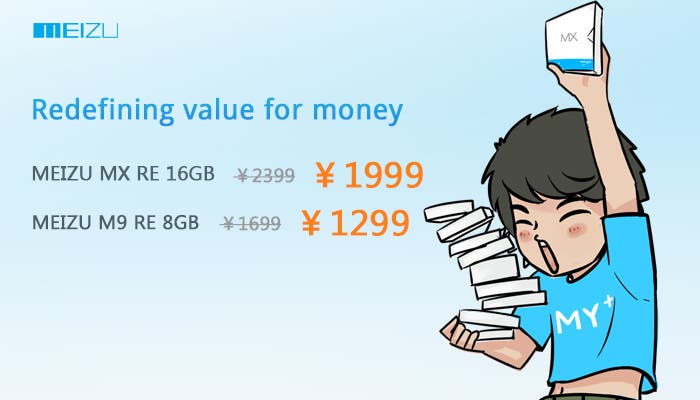 It’s not only the GooApple 3G and V5 which have received a price cut today, Meizu have also announced that they are releasing refurbished models of the dual more Meizu MX and 1Ghz M9 starting at just 1299 Yuan ($204)!Meizu have announced that they will being selling refurbished models of the excellent Meizu MX Dual core Android smart phone this month starting at 1999 Yuan while also reducing the price of M9 refub models to just 1299!

Like the Meizu M8 before them the refurbished models of the M9 and MX will be known as the M9 RE and MX RE and will come boxed and with a full 12 month Meizu warranty just as a brand new Meizu phone does!

Currently the new Meizu MX dual core with 8 mega pixel camera cost 2399 Yuan so buying the RE model saves customers 400 Yuan ($63) which is one heck of a saving!

These new refurbished models will also be eligible for the upcoming Meizu Flyme ROM which will finally bring the latest version of Android 4.0 Ice cream Sandwich to the smartphones.

Both models can be bought at Meizu’s online store here:

Redefining value for money, MEIZU MX RE goes on sale

MEIZU announces that the MEIZU MX RE 16GB will be available starting today at ¥1999 CNY, along with a price reducing of the MEIZU M9 RE 8GB to ¥1299 CNY.

MEIZU Certified RE devices are refurbished versions of MEIZU smartphones recalled within 15 days of purchase. MEIZU’s rigorous certification process includes thorough repairing, cleaning and testing segments. RE versions are given new IMEI and serial numbers, and have no difference in functionality compared to brand new devices. MEIZU provides the same one-year warranty to all RE smartphones.

MEIZU MX comes with a dual-core Cortex A9 1.4GHz CPU, 8 megapixel BSI camera, and 4-inch 292 DPI screen, all in a stunningly beautiful product. Brand new versions of the MEIZU MX retail for ¥2399 CNY in Mainland China, while the MEIZU MX RE costs ¥1999 CNY.

MEIZU MX RE and M9 RE are available to Mainland China customers starting today on MEIZU’s online store at http://www.meizu.com/buy.

Previous How To Install Android 4.0 ICS on the ZOPO ZP100 Instructions and download!