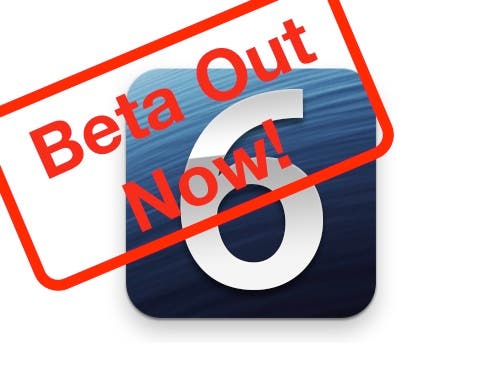 So the Apple WWDC is over and we’re treated to some fantastic news, some of which we already new, but by far the most exciting part of the show was the announcement of iOS 6 for iOS devices, but you don’t have to wait until Fall to get iOS 6 you can download and activate it now! Here’s how!

According to Tim Cook, Apple’s CEO, the latest version of Apple’s mobile operating system iOS 6 feature 200 new features! Most of these features are likely to be quite simple UI and app tweaks which will go unnoticed, however there are some exciting iOS features which many want to get their hands on now!

Some of iOS 6’s most enticing features to us are:

There are plenty more features in the improved iOS 6, but the above are enough to wet are appetite and want to jump the gun and install iOS 6 now!

While iOS 6 is only currently seeding to developers at the moment, it is extremely easy to download iOS 6 for your iPhone, iPod and iPad right now you can download iOS 6 Beta now by choosing to ‘Like’ us or Tweet about us!

However, downloading iOS 6 won’t mean you can use it just yet as you will need a developers account and UDID activation!

How To Activate iOS 6 for the iPhone, iPad and iPod Now?

There are 2 ways which you can install, activate and use iOS 6 on your iOS device now:

Join the Apple as an official Apple developer and sign up for a developer account for $99 a year!

Spend a few dollars using and UDID activation service and get iOS 6 now!

However before we pay for to get our iOS 6 UDID activation code we first must get hold of our iOS devie’s UDID number and here is how!

How to find iOS UDID?

Now you have your UDID you can now get your activation and install iOS 6 on your iOS device. Here are 10 of the best iOS 6 UDID activation services we know:

Warning Before You Update To iOS 6 Beta!

Before you update to iOS 6 Beta on your iPhone, iPad or iPad touch please read the following:

iOS 6 will work with the following Apple devices:

iOS 6 will not work on the original iPad!