I really hope JiaYu aren’t just pouring on the hype source again to keep people interested in the G3, but the company have just release the dual-core Mt6577 JiaYu G3 AnTuTu test scores only hours after publishing photo samples!

After months of waiting and wondering, we are finally getting a clear idea of how the JiaYu G3 is going to perform, and it all looks very promising!

The first great pice of evidence to shine light on how well the G3 performs was yesterday when we got to see the 4.5 inch dual-core Mt6577 phone in a gaming test video, in  which if performed extremely well.

Today we got to see some sample photos taken with the JiaYu G3, which you can see here and look rather impressive for a phone with a suggested retail price of just $140! 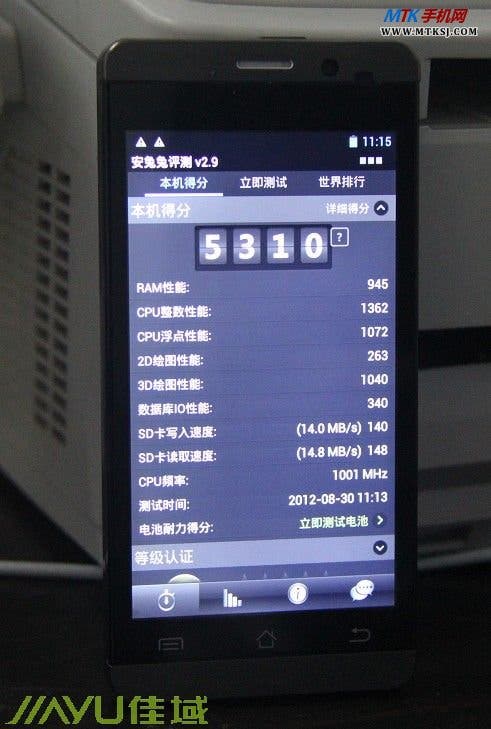 But now we finally have some real proof of the JiaYu G3’s power, a screen shot from an AnTuTu benchmark in which the G3 scored an impressive 5310!

Compare that to the Zopo ZP900 Leaders score of 5230 which has a similar spec but lower resolution screen (the G3 has a 1280 x 720 screen) and the JiaYu G3 is beginning to look like one fantastic performing phone!

I’m hoping JiaYu will release more about the G3 soon, and once they do you know where to get the news first!

Next New iPhone 5 side by side with iPhone 4S