Doesn’t it just make you mad when the bright sun on a beautiful day make’s it impossible for you to see your smart phone screen? Or how about getting to your phone after a few days to find the battery completely drained? Well Chinese E-book brand Onyx hope to solve both of these problems with their E-ink display Android phone!

As you may or may not know, E-ink displays are the type of screen found on many popular E-book readers which make text look almost like real print! This makes it easy on the eyes, and also has the inherit advantages of being extremely easy to see in direct sunlight and also being very energy efficient!

Onyx decided that they wanted to make an Android powered smart phone which could be seen on a bright day and would have enough power to last a week on standby. So using their knowledge of E-ink displays they have produced what is possibly the world’s first E-inch Android phone!

The E-ink display measures 4.3 inches which put’s it on par with other Android phones on the market, and the device is powered by a Cortex A5 CPU, which isn’t the most powerful chip but it is low power and more than enough for driving the black and white graphics. 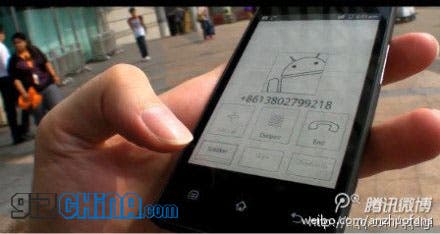 Like ‘regular’ Android phones the Onyx E-ink phone get’s Wifi but lacks cameras and GPS. The current model runs on TD-SCDMA 3G networks although this might change when a production model is launched.

Next Hong Kong shoppers get the lowest iPad Mini prices!