Leaked renderings of the, soon to be announced, HTC M7 have appeared ahead of MWC, from ‘reliable’ sources!

The leak was originally posted over at Unwiredview and shows and unbranded rendering of the HTC M7. The computer generated image is said to come from an instructional video for new owner and hints at some possible M7 design highlights.

The most notable feature of the design is the lack of bezel on either side of the 4.7-inch 1080 display, something we expected more phone makers to adopt on their designs at CES.

It also appears that the front facing speaker will offer stereo sound and seems to show left and right channels. The M7 has done away with capacitive buttons too and seems to be going the onscreen route. 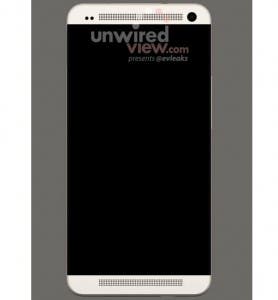