In the wake of Huawei’s CES grandstanding with their Ascend Mate, Ascend P2 and Ascend D2 Android smartphones, Huawei has announced a new member of their MediaQ set-top box line.

What’s notable about Huawei’s new M310 device is their use of their own HiSilicon K3V2 quad-core ARM-9 processor. The device sports 1GB of RAM and 4GB of storage, and a microSD card slot, 802.11n WiFi, Bluetooth 4.0, as well as the normal array of ports and jack.

While the MediaQ M310 is an Android device, Huawei chose to create it’s own custom UI, so it’s not a Google TV device. While this may cause some confusion, it’s really just an issue of user interface differentiation, and the M310 is expected to run most, if not all, the apps intended for Google TV.

Huawei also has a higher end MediaQ M810 coming later this year, that beefs up the processor, memory, and storage, as well as adds a hard drive and DVR-like functionality.

Pricing and availability of the M810 will be revealed in the coming month. Meanwhile, the M310 will be available shortly for a price of approximately US$80 (if not less) when it hits the shelves in the US. 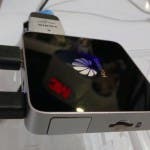