Chinese phone brand Orient might not be the most famous, but that is likely to change as their latest flagship model happens to be a fully loaded Samsung Galaxy S4 look-a-like!

In the past Chinese phone makers were content with producing a phone which just looked like the original, but as technology has advanced and prices have dropped, many of today’s Chinese ‘alternatives’ are worthy phones in their own right!

Take the Orient N9500 for example, the exterior of the phone does look a lot like the new Samsung Galaxy S4 which is bound to generate a lot of attention, but even if Orient had chosen to go for a unique design we’re pretty sure the hardware alone would draw in the crowds.

Under the hood the N9500 is like many MTK based phones currently on the market. It boasts a 1.2Ghz quad-core MT6589 CPU, 1GB RAM, dual-SIM standby, SD card reader, 13 mega-pixel rear camera and Android 4.2.1 Jelly Bean! All good stuff! But as OrientPhone have opted to spec a 1280 x 720 display this phone is capable of higher Antutu scores than many 2GB RAM equipped phones! 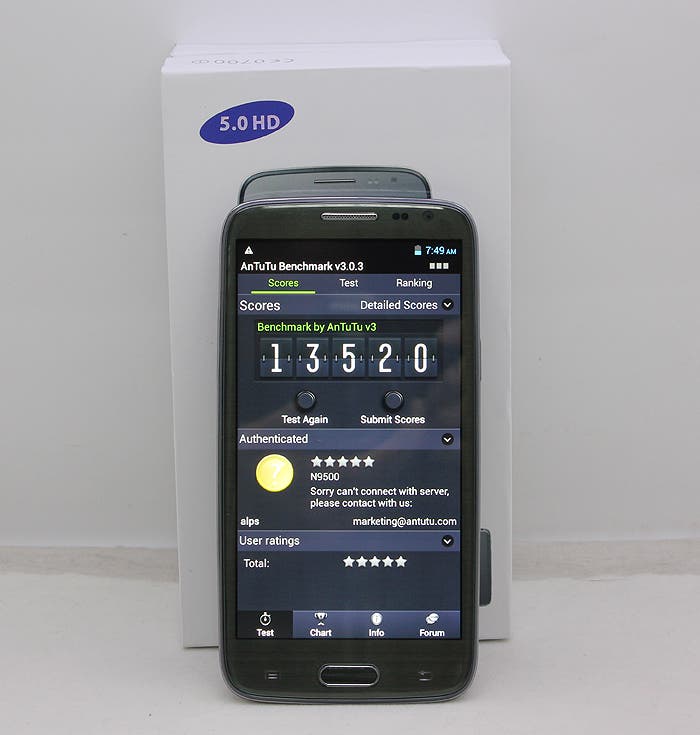 According to these photos the Orient N9500 scores 13,520 on Antutu which is very respectable, and as the display is a 5-inch 720p screen with a pixel density of 320PPi you shouldn’t miss not having full 1080 at your fingertips!

Online reseller OrientDeal are so confident with the N9500’s performance and build that they have even put together this video of the low-cost phone running head to head with a genuine Samsung Galaxy S3!

Pricing for the Orient N9500 is just under $230 and the phone is available now in a choice of black or white body options here.