Apple have finally unveiled their all new, and we mean “all new” version of iOS, the company’s mobile OS. Keep reading for all you need to know about iOS 7.

iOS 7 has easily been the most anticipated iOS updated since the iPhone originally launched. Unlike previous versions of the OS which only brought new features, iOS 7 brings some excellent new functions with an all new (Android like) paint job!

The change between iOS 6 and iOS 7 is rather dramatic. Gone are the old icons and fonts and in with the all new Jonny Ive and co. design language. App icons are more simplistic, there is a lot of use of translucent overlays, new transitions and visual effects plus fonts have been changed throughout the OS.

The finished article looks like a mix between Android, WebOS and iOS, and gives the old iPhone and iPad designs something interesting to look at and get excited about.

Some updates in the design include folders which allow the storage of more apps, translucent keyboards so that you can still see what is going on, a new Notification Center and Control Center, updated multi-tasking, and even a back button!

iOS 7 is crammed pack full of new features. Many of the most interesting have been available on Android for some time, but it’s still interesting to see how Apple’s new design team have incorporated them.

The new lock screen in iOS features a 3D wallpaper effect which is actually aware of hand movements, a nice touch but nothing really to get excited about. As with iOS 6 you will also be able to open the camera app from the lock screen and receive notifications.

Notification center was available in iOS 6 but the new version is more polished, better looking and has more features. A new tabbed interface allows you to easily navigate though you appointments for the day, missed phone called and messages. 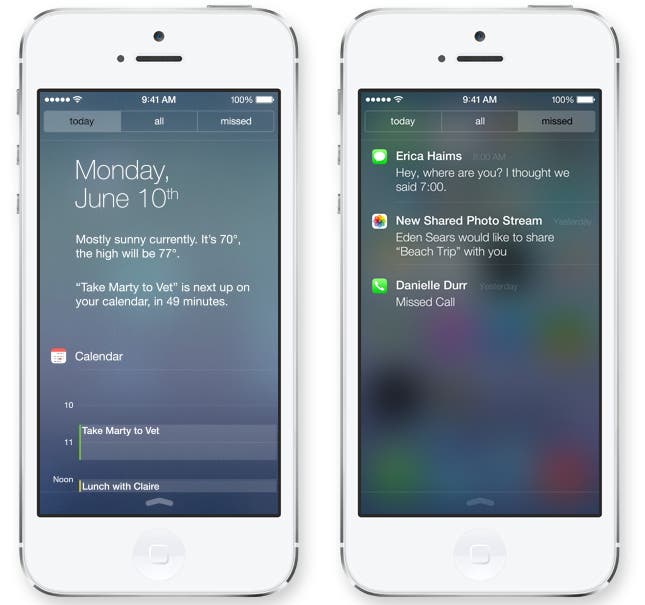 Like the previous version of the notification center, a simple swipe down from the top of the screen opens the translucent window to gain access. One very neat features is that iOS 7 will sync notifications with other devices so once you have dealt with a missed call on one device you won’t be reminded about it on another.

The Control Center is all new for iOS, and very similar to the various toggles Jailbreak developers have been adding to the mobile OS for years. Swiping from the bottom of the screen gives you access to a number of controls including screen brightness, WiFi toggle, iPod controls, the camera app even a new built-in torch. 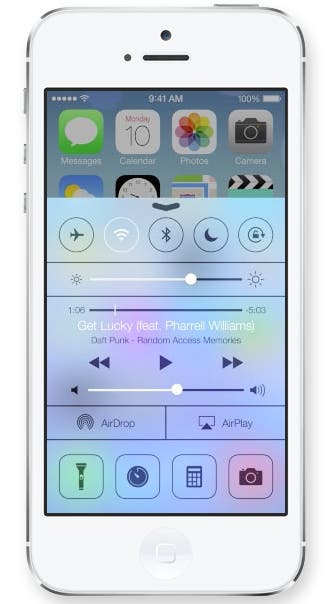 Multitasking also gets a new lick of paint but also some new features which actually ‘learn’ what a you use the most. The WebOS inspired interface uses ‘cards’ which can be shuffled through to see which apps you have open and switch to them as necessary. 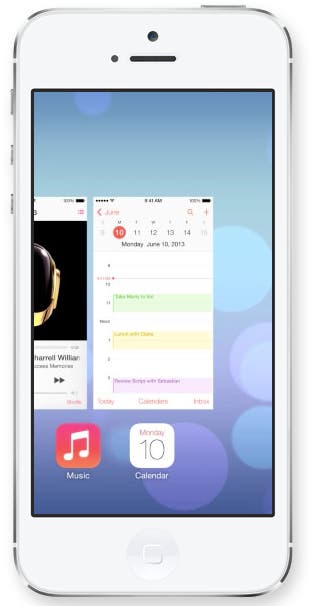 According to Apple multitasking will also be able to learn a users preferences, and use notifications to decided which apps will be launched next.

In addition to the new interface, iOS 7 has a new back button built-in which allows you to swipe back to your previous application!

If you had a good look at the Control Center screenshot above you will have noticed AirDrop. AirDrop allows users to share content, contacts, photos etc between each other over Wifi and Bluetooth. What makes AirDrop unique though is that you can share to a number of people/devices at the same time.

The camera app in iOS 7 is much simpler than previous versions and features simple navigation from camera, to video capture to panoramic via a sliding menu along the bottom of the screen. 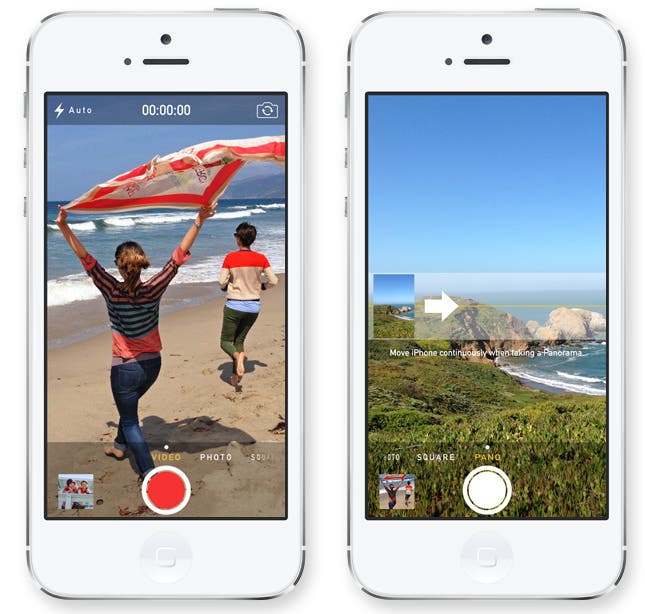 Photos are stored in groups of Collections, Moment and Years depending on when and where the photos were taken. This should simplify syncing when importing photos in to iPhoto on the Mac.

Siri looks and sounds much better in iOS 7, with an all new interface and improved voices. She is also a lot smarter now thanks to inclusion with Bing, Wikipedia and has the power to do a lot more with your iDevice. Siri in iOS 7 is able to read messages and answer questions just as before, but she can now also read Tweets and make adjustments to your device such as enabling bluetooth, changing the screen brightness or increasing volume. 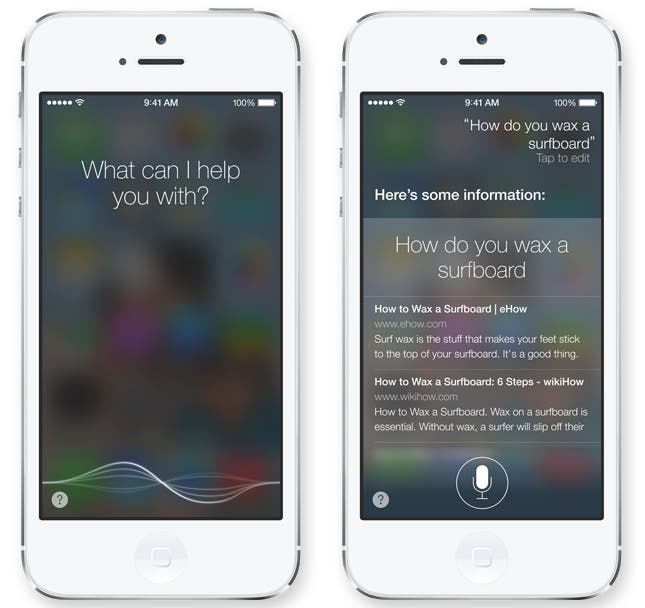 Siri will also be making its way in to a lot of new cars this year with the new iOS in the Car system. The System will use the dash mounted screen to help you keep track of notifications, make calls and (get lost) while navigating with Apple Maps.

Apple maps has been updated to allow you to send directions from an OSX machine to your iOS device. The new OSX app also brings features like local search and reviews you your desktop.

There has been a lot of talk about phone theft recently, and it seems Apple thinks it has the answer with the new iOS 7 Activation lock. 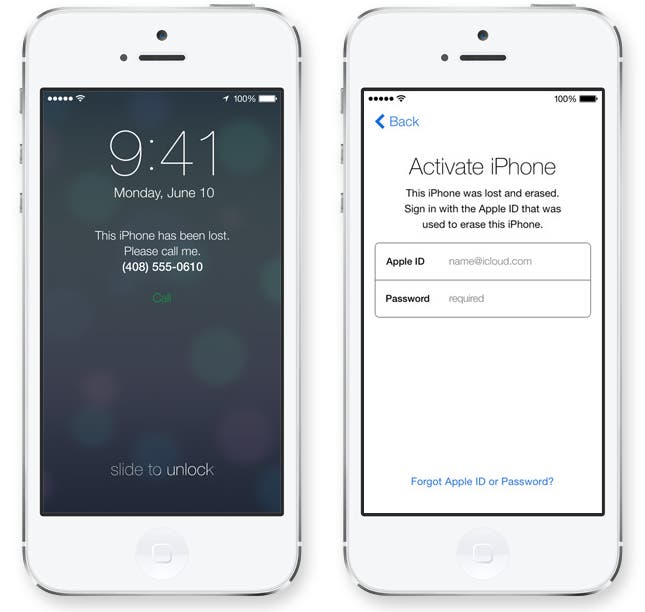 Even if a phone is stolen and wiped it won’t be able to be used unless you log-in to iCloud with the activation credentials , without them a thief will have nothing but a pretty paperweight!

iOS 7 – is it enough to make you go back to Apple?

I’m very excited about iOS 7, I can’t wait for it to launch so that I can install it on my iPad mini, but I don’t feel it’s enough for me to go to the expensive of trading in my Android phone for the next generation iPhone.

It’s a great move for Apple and wonderful to see the company make some big changes, but for me the most exciting part is how Android ROM developers will take these new ideas and make them their own. Looking forward to an iOS 7 inspired MIUI V.6? I am!