It’s no secret that Xiaomi have their eyes on China’s living rooms as the company have already produced their own Xiaomi Box which is on sale in major cities across China. Like the the Apple TV, the Xiaomi box is a low-cost black box which connects to your existing TV and allows you to stream content from the web, the major difference being the Xiaomi model runs a heavily modified version of Android.

But are Xiaomi already prepared to launch a smart TV based on their box? These leaked photos would suggest yes!

UPDATE: Photo’s of the actual Xiaomi TV have also been leaked and added to this post! The photo claims to show a factory which is manufacturing cardboard packaging for a 47-inch Xiaomi TV. From the box we can see the purported TV is a full 1080 HD model with support for Dolby sound, DTS and build in Wifi! 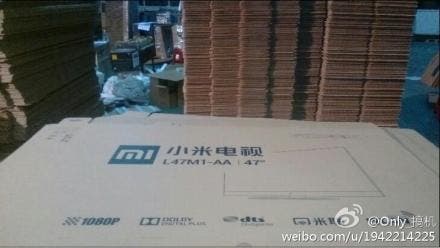 Further reports claim that the Xiaomi smart TV model number L47M1-AA could launch on August 16th at the same time as the Xiaomi Laptop and the Xiaomi Mi3 Android smartphone!

What do you make of these rumours?