FAEA are a new Chinese phone manufacturer for 2013, and their phones so far have been feature packed and well price, but can the FAEA F2S take on similar phones from big brands Neo, Newman and Zopo? Keep reading for full in-depth review of the FAEA F2.

FAEAmobile sent us the basic version of the FAEA F2S to review. The phone features the same 1.5Ghz MT6589T processor as the advanced version (once it finally goes on sale) but with 1GB RAM.

Of all the Mediatek phones we have tested this year, possibly ever, the FAEA F2S is the best looking. It is a very handsome phones and looks much classier and expensive than it’s price tag would suggest, so just how good is this phone?

Although NFC (near field communication) technology is catching on here in China, it is still rare to come across a phone with NFC built-in. The FAEA F2S is one of the few phones which has NFC, it’s a great feature which we are going to see more of over the next few months as newer technology evolves to make use of it. 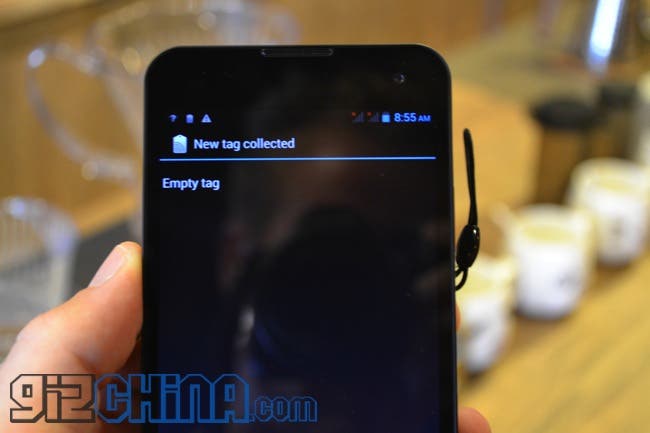 This year we have reviewed the JiaYu G4, Newman K2, Zopo C2, C3 and ZP980, Neo N003 and more. Specifications on each of the phones are pretty close, but design couldn’t be further apart! 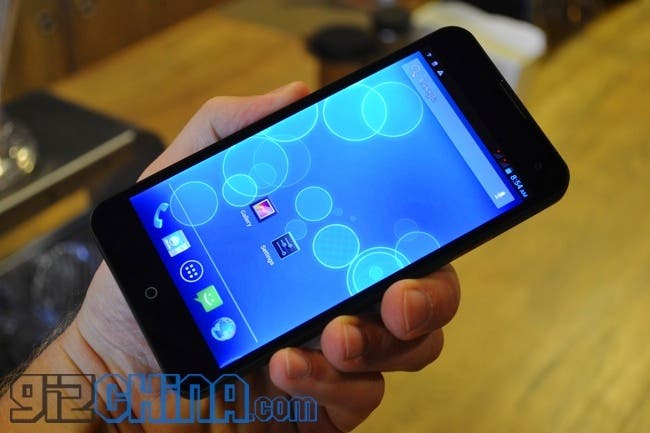 The FAEA F2S is by far the best looking Mediatek phone of the bunch! 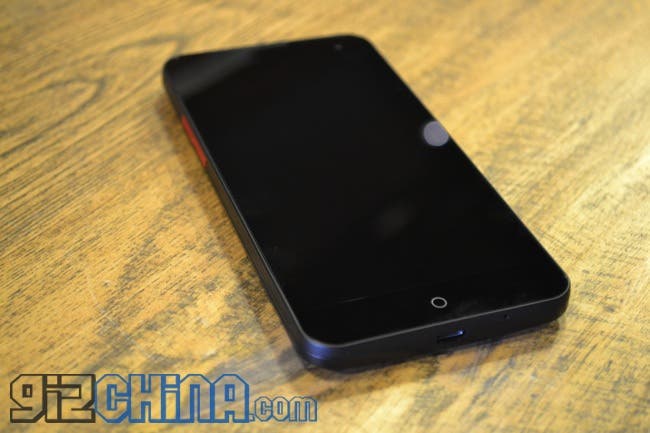 FAEA have taken a few styling ideas from the HTC One and the new Meizu phones with the F2S and have created a very stylish and sleek-looking handset. It draws attention to itself whenever it leaves the confines of your pocket!

From the front and sides of the body the FAEA F2S could easily be mistaken for a phone costing twice, even three times as much! 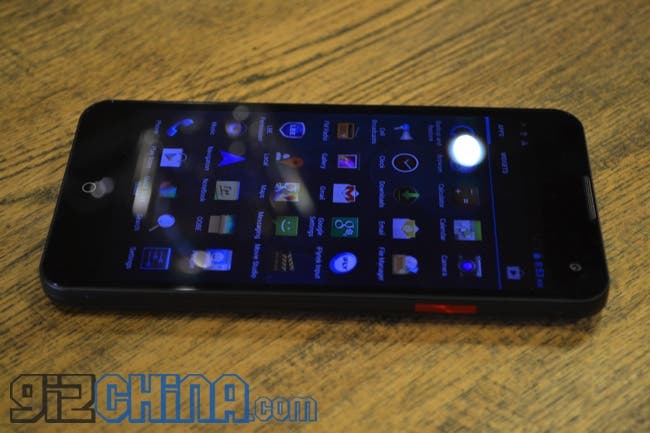 Although FAEA designers were obviously on top of their game when designing the front and styling the sides, they must have used up all their inspiration before tacking the rear. Compared to the rest of the phone the rear  is cheap looking and really a let down for such a nice looking device!

The phone measures in at 141 x 71 x 9.7mm, not the thinnest phone in the world, but thanks to the nicely tapered design it does feel and look much thinner than the dimensions suggest. 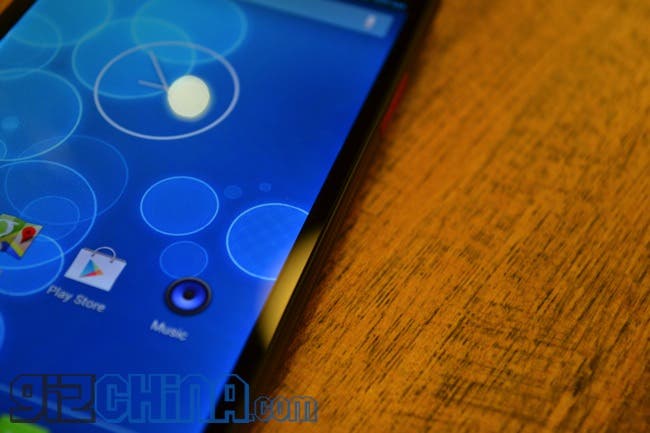 A 5-inch 1920 x 1080 display takes up most of the front of the phone. Bezels aren’t the narrowest, but they aren’t overly big either.

A single capacitive ‘halo’ ring is the only Android navigation button which is visible on the chin of the FAEA F2s. This acts as the home button, and the black areas either side are the ‘back’ and ‘menu’ options. There is only a light in the halo, which also pulses to notify you of messages. 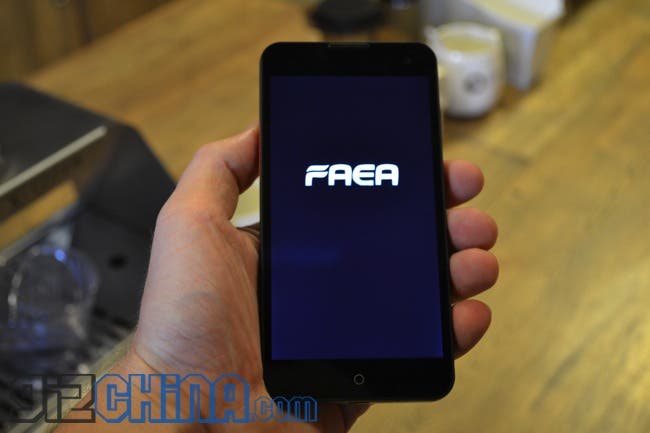 One handed operation isn’t an issue, and FAEA have placed all the physical controls in the same place as most popular MTK phones, so the power button is on the right and the volume toggle on the left. 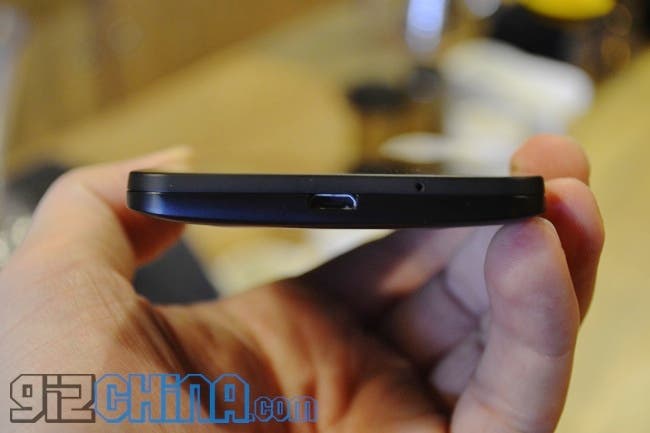 A 3.5mm headphone jack is located at the top of the phone, and micro USB in the base. 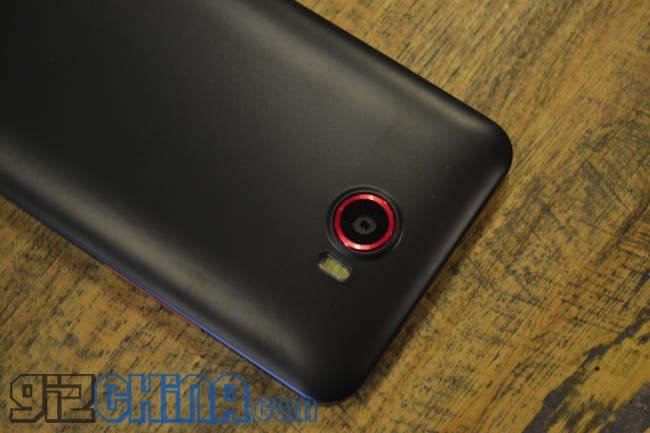 As mentioned above the rear is a bit of a styling let down. The red anodised ring around the camera lens is a little too thick and tacky looking, but it is all functional. A dual LED flash adds plenty (sometimes too much) light to dark subjects and the rear speaker is ample enough for gaming and the odd movie. 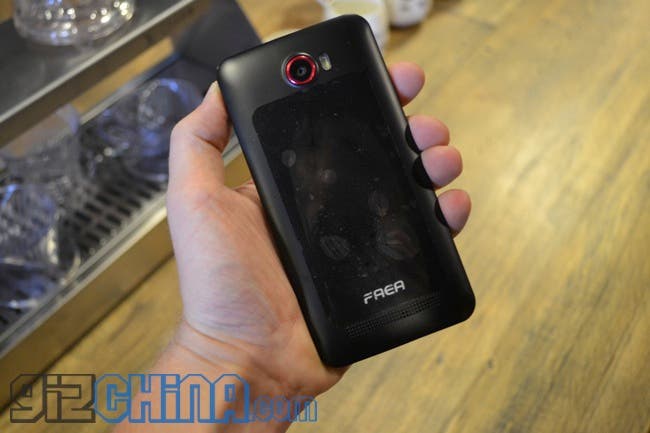 FAEA have done a great job of making a really nice looking phone, but they haven’t managed to make a sturdy one! It is relatively flexy! Holding the phone like a sandwich you can easily bend it enough for the removable rear panel to pop off! Even using the phone to take photos you can hear creaks coming from the plastic body.

The display on the FAEA F2S is as good as any of the 5-inch 1080 panels we have used this year. 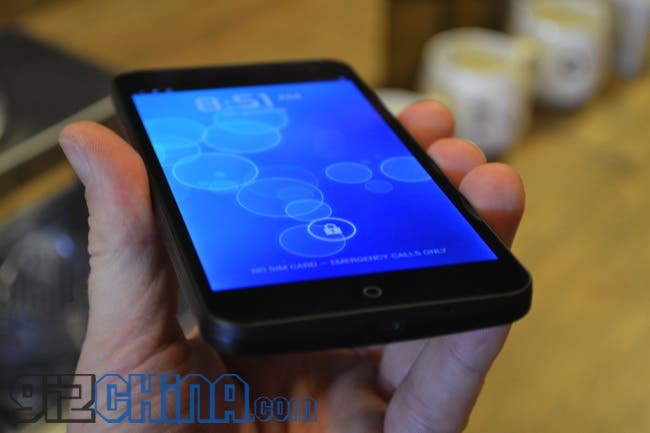 Having a resolution of 1920 x 1080 lends itself well to gaming, browsing the web, watching movies and reading.

The brightness is fine and is as easy to see day of night as the Neo N003 or my Xiaomi Mi2. 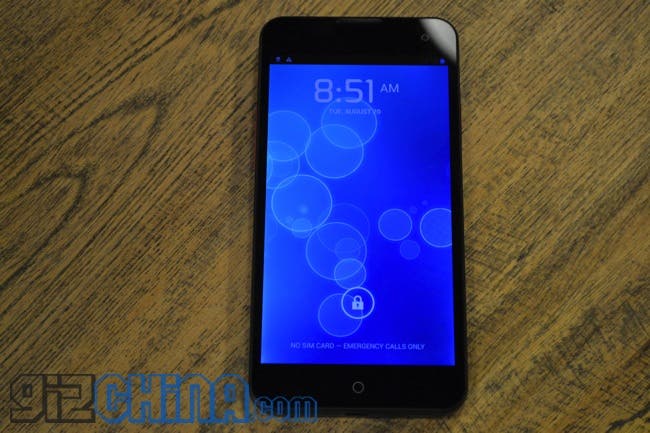 Our review phone has the same 1.5Ghz MT6589T processor and 1GB RAM as the Neo N003 we tested earlier this month. With a similar 5-inch display and 1920 x 1080 resolution we expected performance to be on par with the Neo. 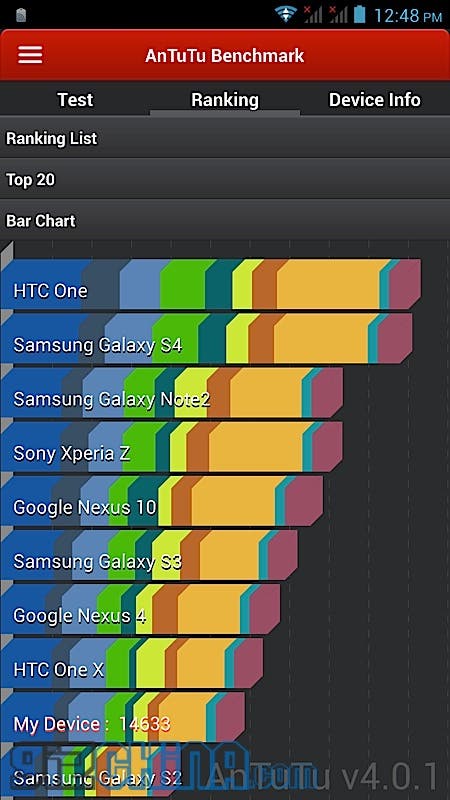 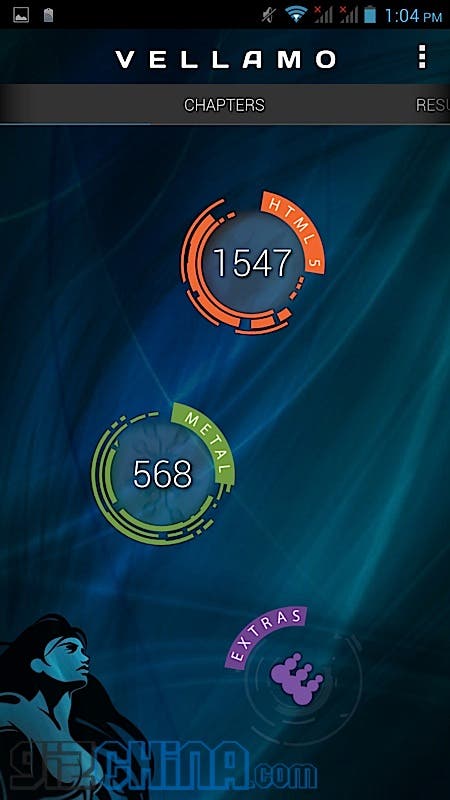 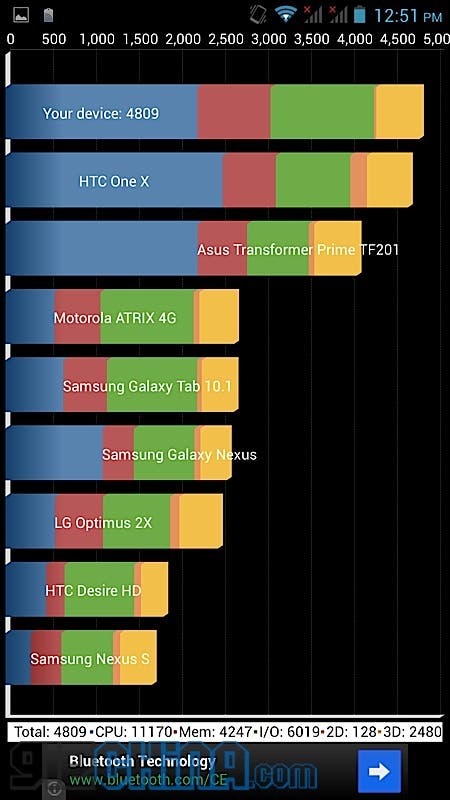 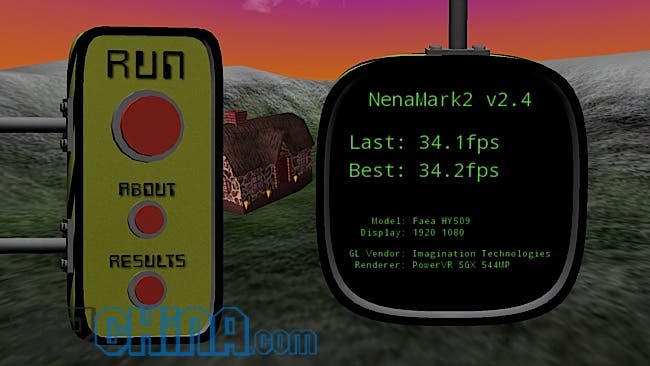 As usual I installed Riptide GP2 on the F2S, but unlike the N003 and Newman K2 the FAEA had a real tough time handling the game. Compared to the other phones the F2S ran the game very slowly and i really couldn’t continue playing it. I also tried Riptide GP1 as it is less graphically challenging on a device, surprise surprise it ran as fast and smoothly as you would expect.

So unless you don’t play anything more challenging than Angry Birds or Fruit Ninja you may well want to either wait for the 2GB RAM model F2S or possibly opt for the Neo N003.

I also found that the stock launcher isn’t as responsive as I would like. Installing Nova launcher improved things, but this obviously doesn’t help gaming performance! Some optimisations and tweaks from FAEA will be much appreciated! 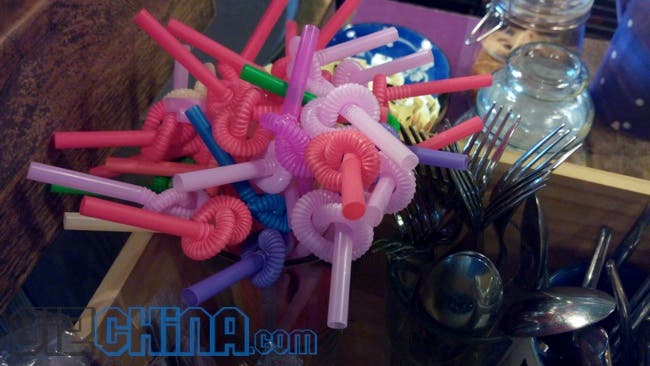 The FAEA F2S has a 13 mega-pixel rear camera like other phones we have tested, but some improvement is needed in both the image capture and video capabilities of the phone.

The sensor and optics are just as capable as other phones we have tested, so getting great looking photos is possible. 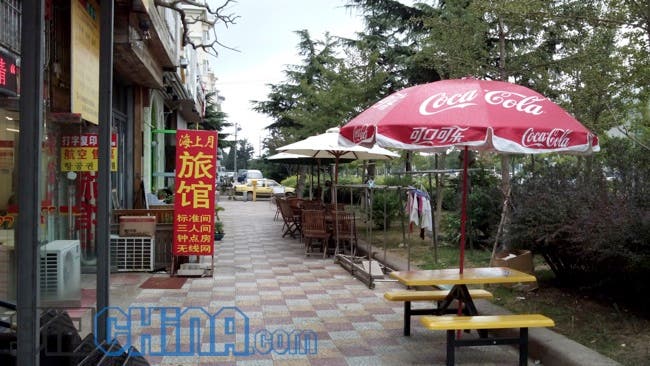 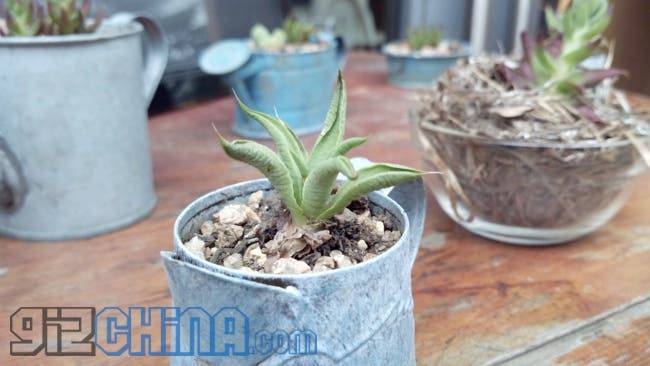 Plus colour reproduction is quite good even in dull stormy conditions. 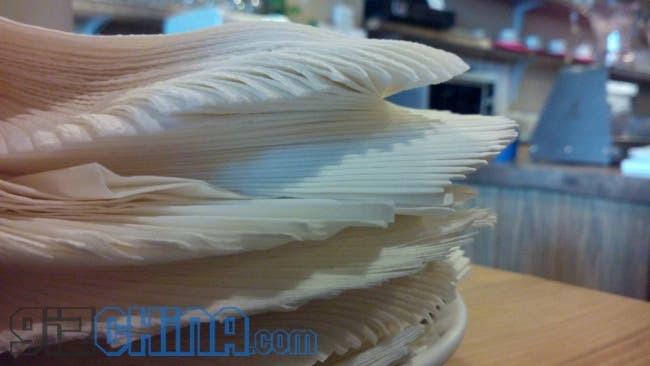 However, the focus is slow on the FAEA F2S and is only suitable for taking photos of stationary objects. It isn’t a device you could rely on for a sporting event, birthday party, night out with friends or basically any time you need to photograph a moving object. 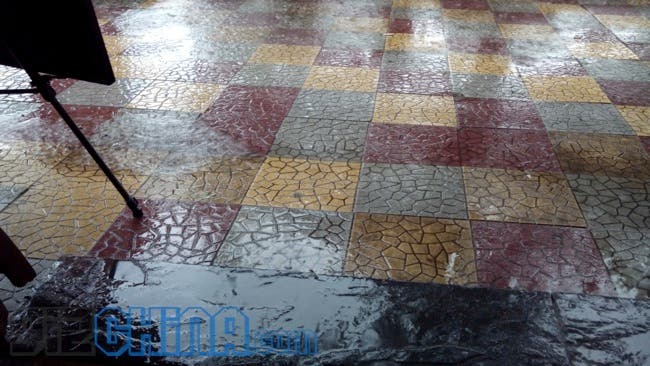 As usual I have posted these photos as reference only,  you can download the full size, untouched FAEA F2S photos here.

Video performance is better than most of the Mediatek phones we have reviewed this year, but it isn’t as good as the Neo N003. The video below shows that the F2S does look for focus now and then, but it isn’t as bad as other phones. However, is this because FAEA have done a good job optimising video on the F2S or is it just because the focus is just so damn slow we don’t notice as much?

After the poor gaming performance, slow camera and bending body I’m pretty sure that most of you have come to the same conclusion as I have, so I’ll just quickly mention the other features before wrapping the review up. 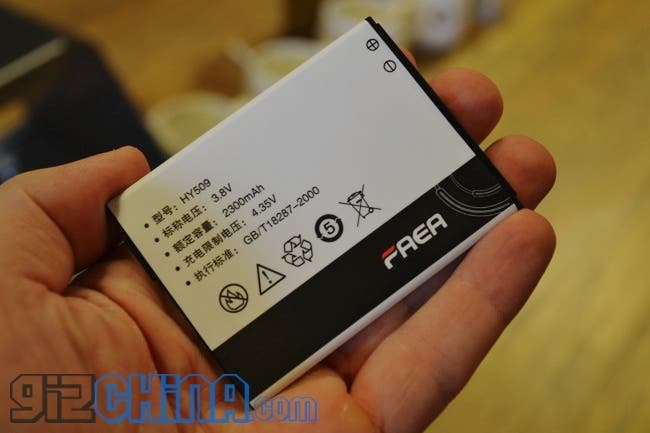 Battery life is average, but with optimizations to the ROM I’m sure FAEA can get a little more run time out of the 2300mAh battery. As it was, I just used the F2S as a phone with email and internet due to the poor gaming and camera performance. Even with this workload battery life could have been better. 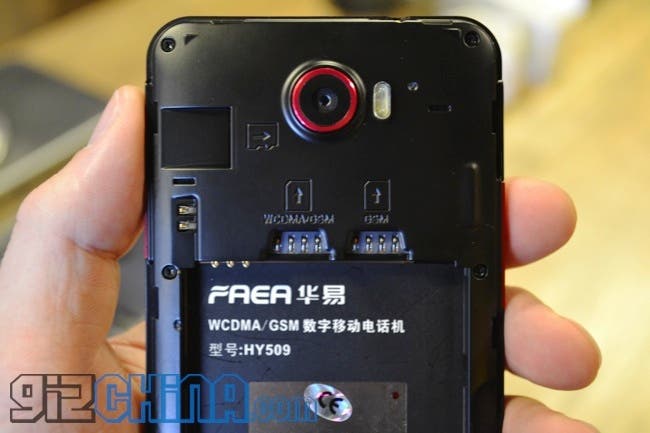 The FAEA F2S is the best looking Mediatek phone of this year. That is without a doubt! FAEA have done a great job of making a really handsome phone! 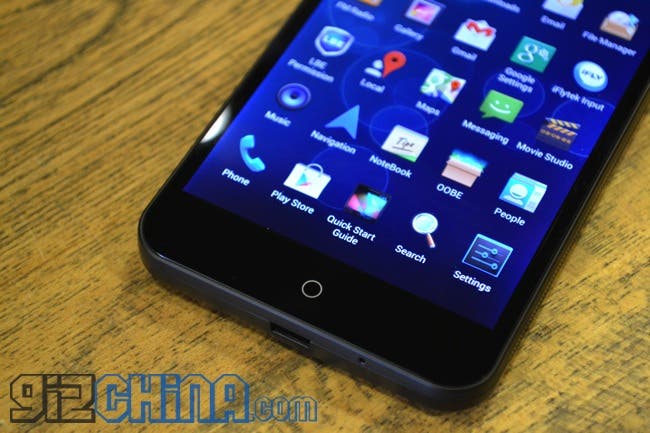 However this is all they seem to have concentrated on. The body of the phone is easy to bend in your hand and creaks and cracks in use. The camera is slow to focus, and the gaming performance isn’t up to scratch! 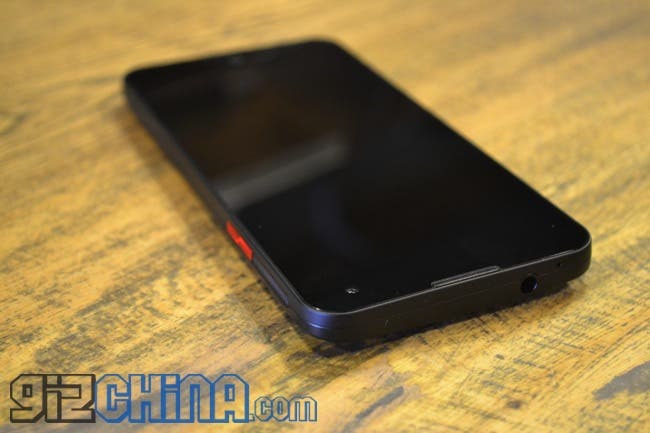 What I hope FAEA do now is take the F2S make it more sturdy, improve the camera and optimise gaming, and then they would have a great phone. I don’t want them now to go and launch an all new 5.5-inch or 6-inch phablet, I want them to fix the FAEA F2S and make it as great as it could be.

For a new phone brand FAEA took on quite a challenge! Producing a feature packed, NFC equipped, 1080 phone, isn’t easy and unfortunately they haven’t managed it this time round. Let’s keep our fingers crossed that FAEA can take this handsome device and get it sorted!

Thanks to FAEAmobile for supplying our FAEA F2S review phone.