Rockchip bosses have confirmed that the semiconductor fabrication company is working on more powerful next-gen quad core processors, which will be succeeding their current RK3188 series.

Mediatek seem to hog the news in the budget device segment, Rockchip indeed haven’t been in the thick of the action lately. However, the company had a successful stint this year with international biggies like HP (HP Slate 7) choosing Rockchip to power their devices. Now, the Chinese fabricator has announced plans for their next series of chipsets – the RK32xx. 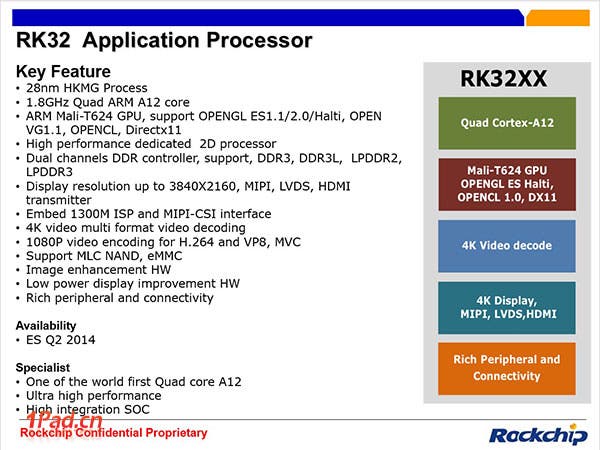 The RK32xx chipsets will be using a 28nm manufacturing process, and will have a quad core CPU on board which will operate with a frequency of up to 1.8GHz, with the cores built on the Cortex A12 architecture. Mali’s T624 will be handling the graphics department with support for DirectX11 and 4k video playback. The RK32xx will also have support for a variety of RAM technologies such as DDR3, LPDDR2, LPDDR3, etc. The chipset will be made available to manufacturers by Q2 ’14, and we hope to see retail devices running on the RK32xx in the second half of 2014.