Now that we are recovering from the Turkey and presents it’s back to work on testing some of the latest 8-core Chinese phones. First up is a quick look at the THL T100S Antutu benchmarks.

The THL T100S, aka the Monkey King 2, is one of the most anticipated 8-core Chinese phones of the year. The phone boasts a 1.7Ghz MT6592 processor, 2GB RAM, 32GB memory, 13 mega-pixel rear front and rear cameras and an f2.0 aperture on the main shooter! In short it’s a feature packed device and all wrapped up in a high-tech, Sony Xperia-esq design.

We have already posted our initial thoughts of the THL T100S, along with a short comparision with it’s rival the Zopo ZP998, but while we work away on the full THL T100S review have decided to post an update by way of Antutu benchamarks! 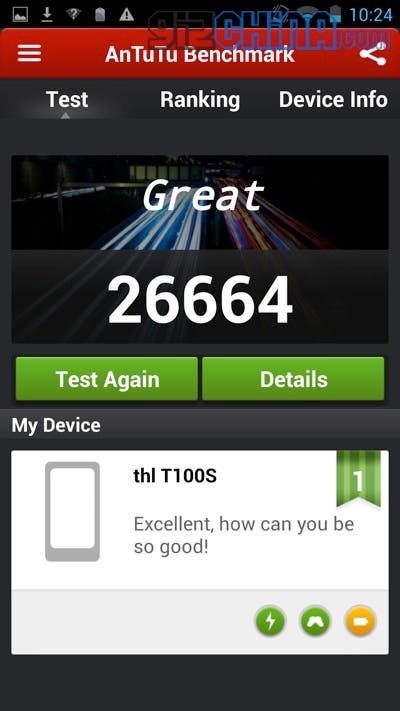 With an 8-core 1.7Ghz processor on board and 2GB RAM we had high hopes for the THL T100S and we aren’t disapointed! Running Antutu on our review phone we managed an average score of well over 26,000 points! With a bit of optimisation we could well see 27,000 or more from the flagship THL!

For our full THL T100S review we will post more benchmarks, but in reality you can probably determine that they will also be exceptionally high too.

Thanks again to Antelife for sending over our THL T100S for review.

Previous How to install the Xiaomi App store (Google Play Alternative) on your phone!