The ultrathin JiaYu S2 octacore smartphone has been gong through the usual Antutu benchmarks scoring as well as rivals the THL T100S and Zopo ZP998.

Running a 1.7Ghz MT6592 processor with 2GB RAM on a 5-inch FHD 1920 x 1080 display the S2 has the same hardware as rival flagship phones from Zopo and THL and like those phones is capable of some rather good Antutu benchmarks! Scoring slightly less than the Zopo and THL phones, the JiaYu S2 manages 25,886 points in Antutu, and we’re sure the difference in benchmarks results between octacore phones is just as unnoticeable as it is between a good quad-core and the newer octacore machines. 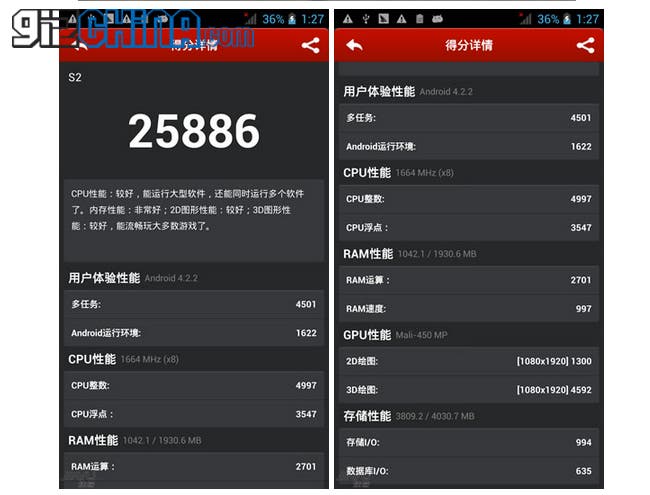 The JiaYu S2 measures 139 x 67 x 6mm, a lot thinner than similar spec phones, and is also made from stainless steel rather than the usual plastic. Other S2 details include a 13 mega-pixel main camera, 8 mega-pixel front and NFC.

What to you think of the JiaYu S2 compared to the current crop of octacore Chinese phones?