One of the things we love about the Chinese phone industry is the variety of devices. You can go too $800+ super phones to bargain basement models. We take a look at the latter this morning with a quick review of the $148 Doogee Bigboy DG600.

The Chinese tech industry is where everyone is looking for low-cost, unlocked smartphones. In this quick review we take a look at one of the most affordable phablets on the market, the 6-inch Doogee Bigboy D600. 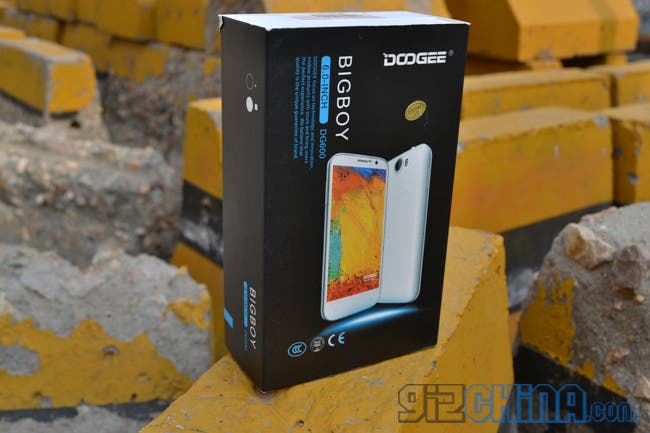 Upon opening the tight-fitting box lid of the DG600 we are presented with the large 6-inch display of the device itself. 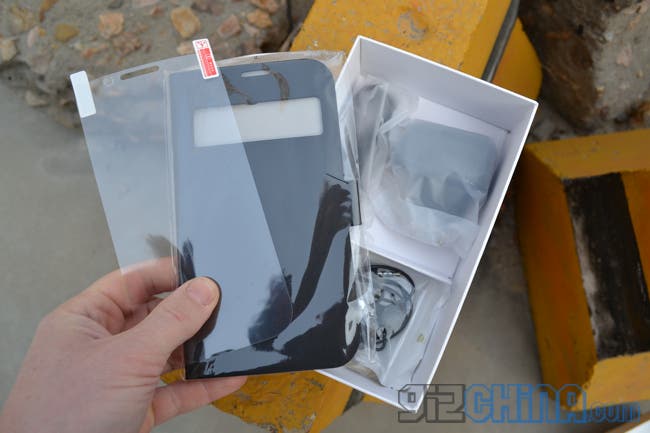 Under the phone a nice assortment of accessories are also found including a clear screen protector, leather look folding case, charger, ear-phones and data-cable. We assume the battery would also be found underneath too, but our review unit shipped with the large 3800mAh battery already inside. 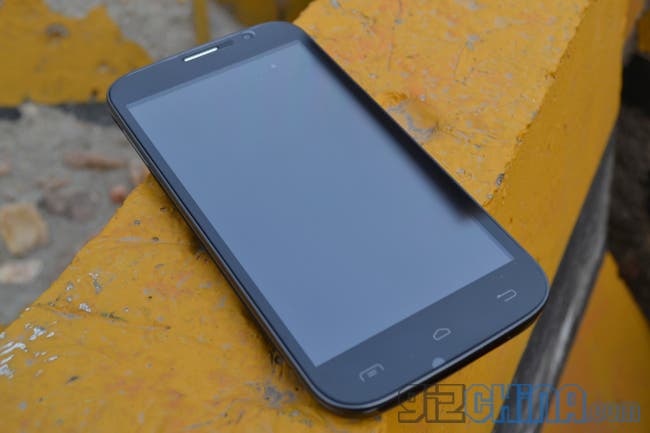 With the battery already in the phone the first thing that strikes you is the weight of the device! The phone weighs in at a rather hefty 271g (according to my kitchen scales) without film or case, in comparison the 5.9-inch Oppo N1 weighs just 217g (on the same scales). The difference in weight could be partly due to the larger battery, but mostly from the 6-inch qHD display. 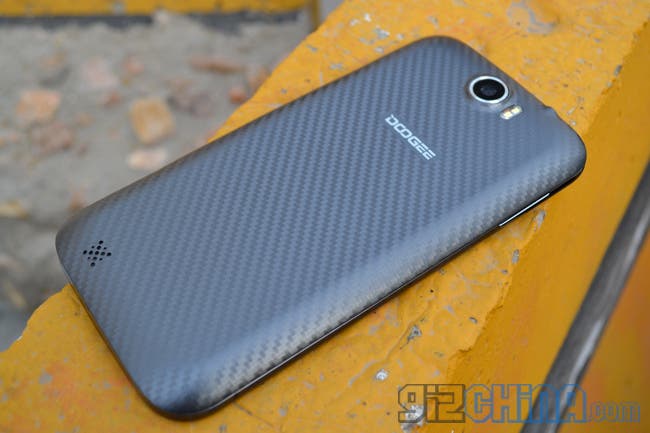 The model we had been sent by Chinese reseller Antelife is the black version of the phone which is adorned with a fake carbon fibre removable rear shell. A white version is also available. Personally I like my carbon fibre to be real and find the faux look to appear cheap and tacky, but to each his own. 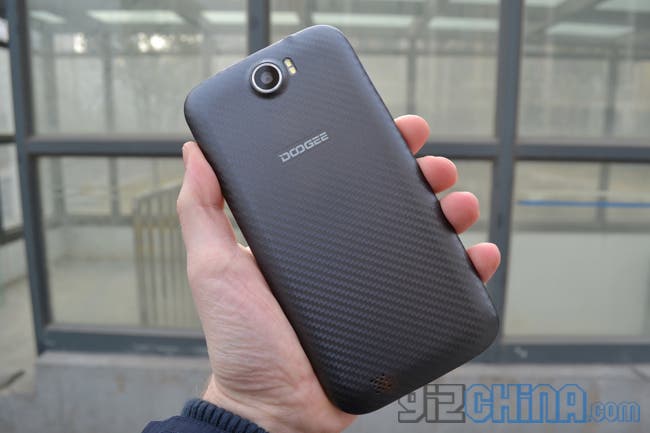 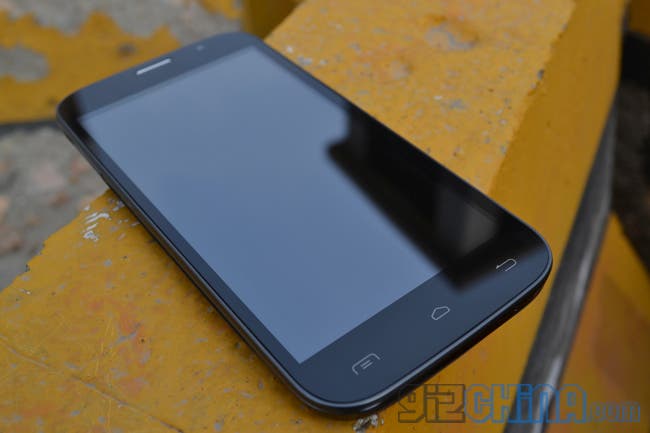 If we take a look at the front of the phone we can see the large 6-inch expanse of display. The display on this phone isn’t an OGS model se you can see a bit of depth between the glass and the display beneath it. This doesn’t affect the use of the phone, but does account for the width and weigh, not to mention is a great way to keep costs low. Above the display is a 2 mega-pixel front facing camera and receive, and below, on the ‘chin’ we have back-lit capacitive buttons. 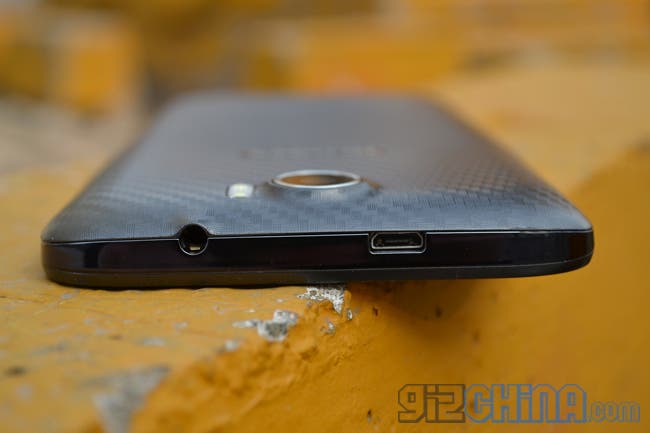 Hefting the chunky DG600 over to the rear and we have that fake carbon fibre look removable panel, a Doogee logo, small speaker grill and a protruding 8 mega-pixel main camera with dual-LED flash. According to my measurements the camera pokes out an additional 3mm from the rear meaning the phone is a whole 13mm thick at this point! Surely there would have been enough space to have the camera sit flush?! 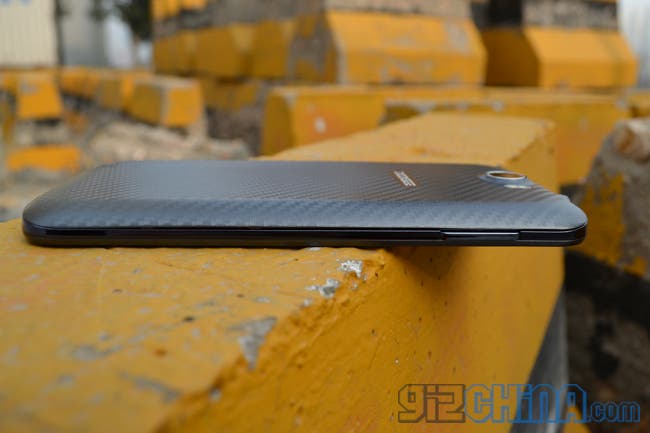 Encircling the entire perimeter of the phone is a glossy plastic strip where we can find a volume rocker located on the left, power button on the right, and headphone jack and USB in the top.

Attempting to twist of bend the phone is futile, unless you really are attempting to purposely break the phone in two, and there are not creaks, cracks or rattles when using the Doogee Bigboy. 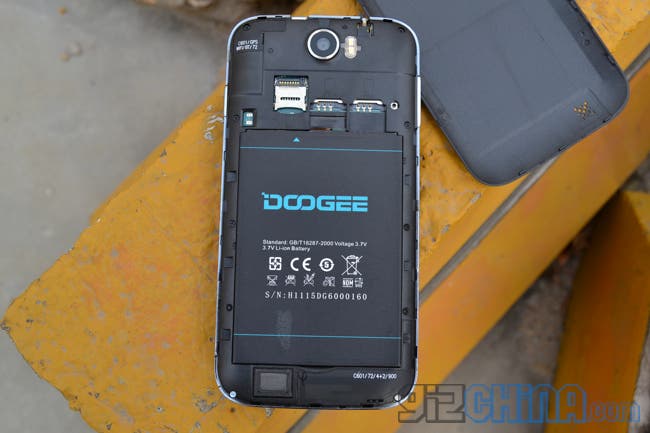 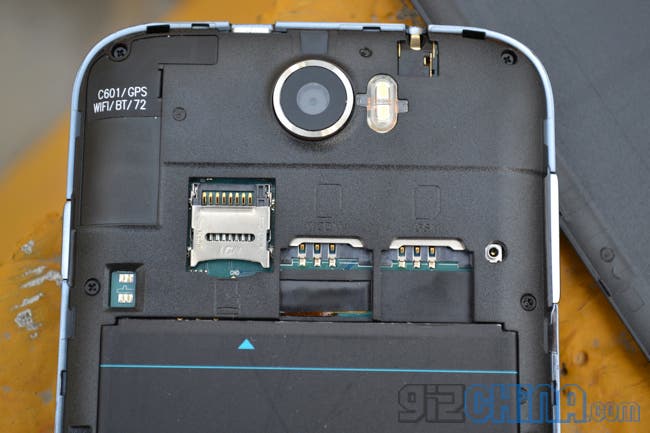 To the left of these there are two connectors which I believe are for an NFC chip to connect to. The removable shell also has a bracket which would house connectors and a square is marked out where I believe an NFC chip could be placed. Whether an NFC equipped version of the phone is heading to market or you can retrofit NFC to this phone is currently unknown though. 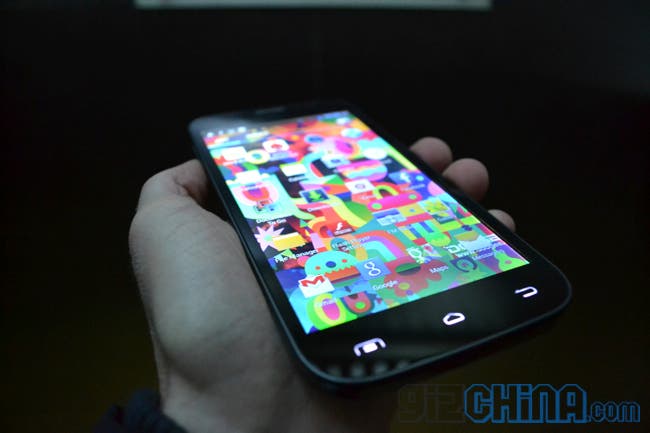 The display of any phone is one of the most costly items and is a place where manufacturers can drastically reduces costs. The 6-inch panel on the Dogee DG600 has a low-resolution of just 960 x 540 meaning text isn’t as clear and images can look a little grainy, but for this price point we can’t really complain. 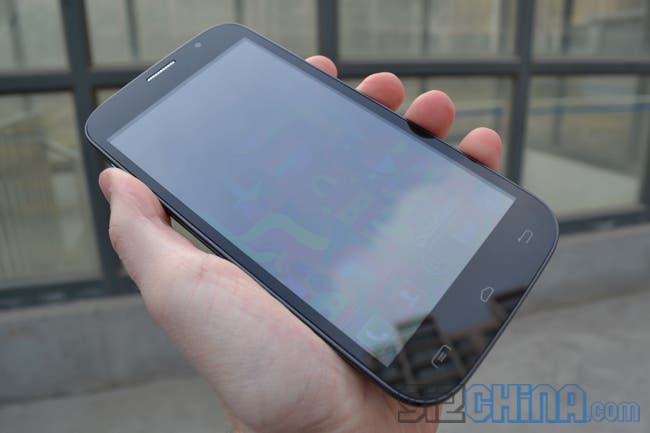 The specifications say the display is an IPS unit, and although when on full brightness it does offer bight clear viewing, it is lacking when viewed from angles or the sides. The thick glass doesn’t help either as reflections are easily picked up blocking the view of the screen’s content.

As for touch response, I think phone technology (no matter the cost) has gotten to the point where this is no longer an issue, and can happily report the display works perfectly and is nice and responsive.

Another area where the Doogee Bigboy DG600 saves on costs is the use of a dual-core 1.3Ghz MT6572 processor and just 512mb RAM. Now-a-days we are more accustom to seeing at least a quad-core processor and 1GB RAM (2GB is more common too). 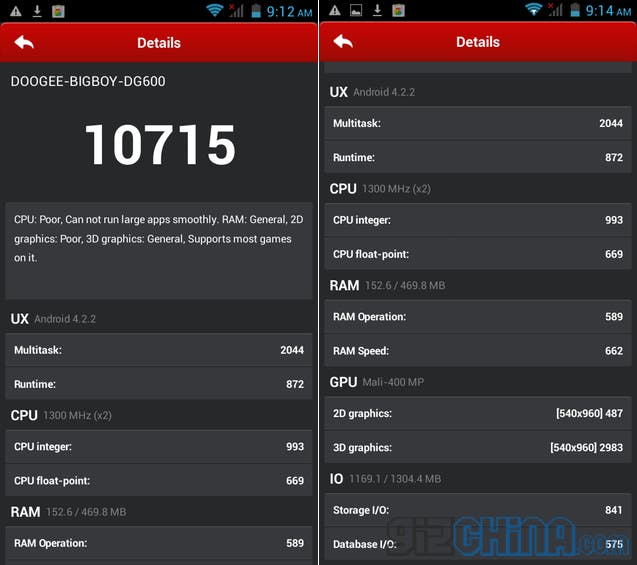 For general use though the Doogee’s processor and memory are surprisingly adequate. The phone feels snappy and responsive when navigating around the Android 4.2 OS, and launching any of the default/built-in apps is as fast as we can hope for. 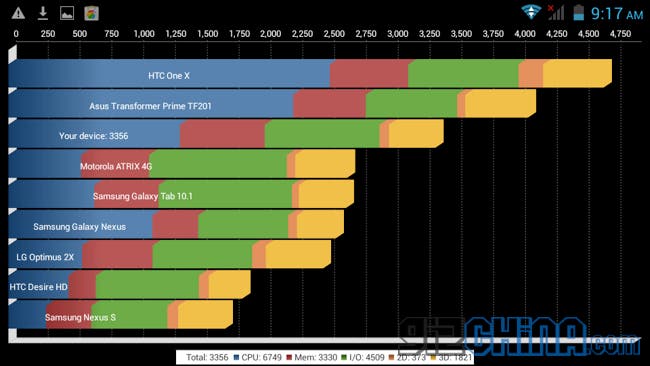 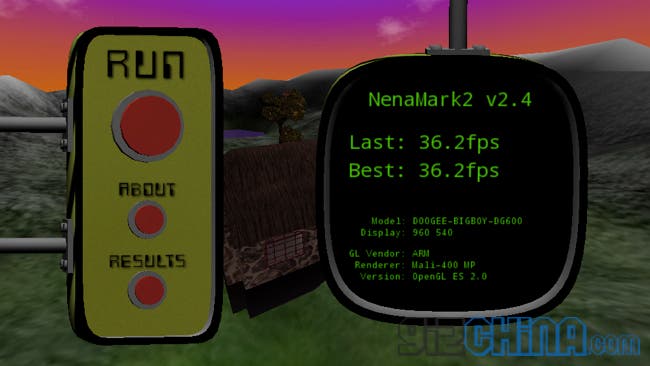 Obviously we can’t expect too much in the way of performance from the Doogee and it’s dual-core processor but for less than $150 it performs quite well. Normally we run a whole host of benchmarking tools on a phone to test the performance, but in this quick review we ran just Antutu, Quadrant and Nenamark. As you will see in the results the phone struggles with 3D and 2D rendering.

Of course benchmarks are one thing and actual real life use is another so I fired up Real Drift on the DooGee to see if it could handle it. The first few seconds as the menu stuttered across the display were not all that promising, but once the game go going things became better. 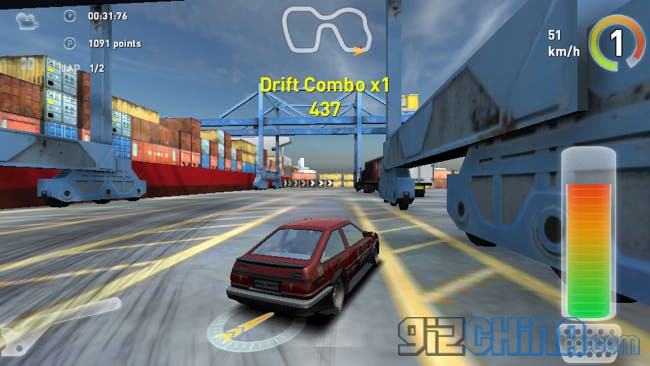 It’s still not the super clear and fluid experience I get on a more powerful phone, but to keep you entertained on the commute to work and very casual gaming it should be enough.

According to the photo details the 8 mega-pixel rear camera on the Doogee has an aperture of f2.0. I personally find this hard to believe on a phone of this price. 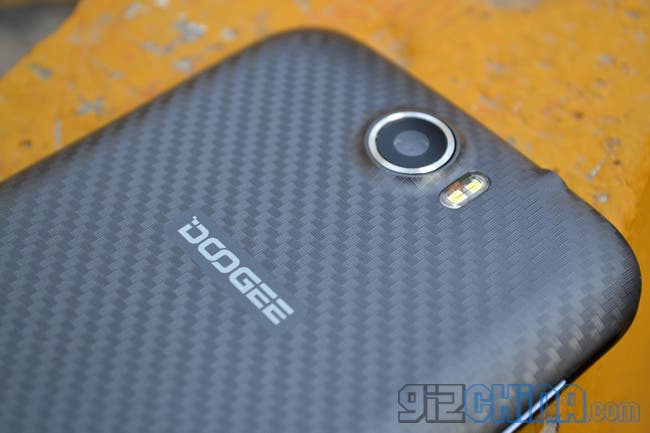 I am used to using Chinese phones which hunt for focus when making video, but not when taking photos of stationary objects. This becomes rather infuriating and means capturing an accurate, in focus photo a hit and miss experiment. Photos are captured very slowly and the phone struggles to keep save the image in a respecatale time. The camera is dreadful to use, but the images the Doogee is capable of recording are much better than we expected. 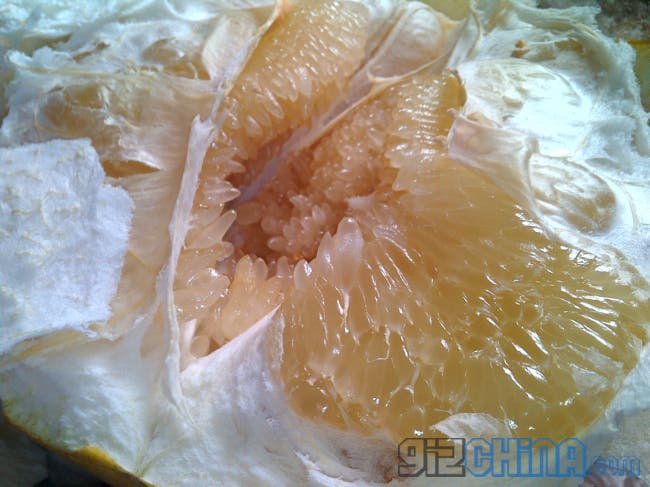 Battery life is fine for a device of this size with a dual-core processor, and we were able to run the phone for a full day without need of topping it up. Obviously this is not a gaming machine and due to poor camera performance the battery life it is going to be better than other devices out there. 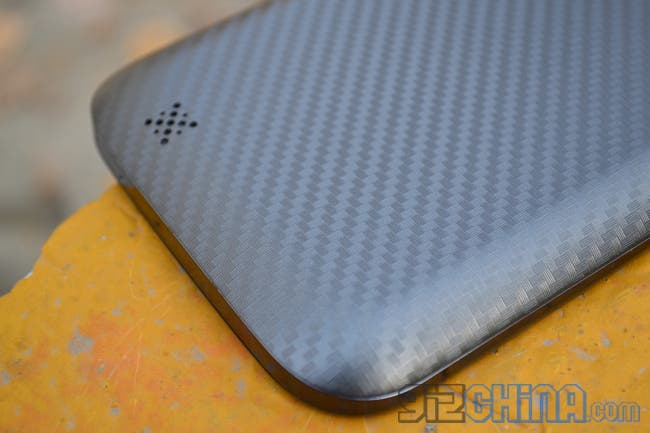 The external speaker is very loud, but of low-quality. There is no bass just a lot of treble and it sounds like all audio is being reproduced using a tin pan. 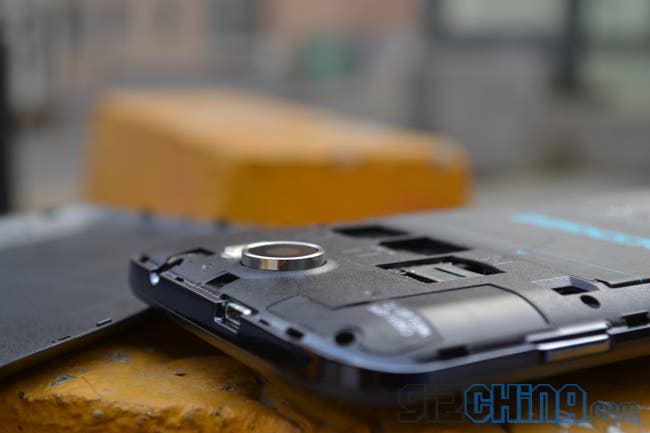 No surprises in the Bluetooth, 3G and WIFI department. They all worked flawlessly though out our short time with the phone and offered a good strong signal.

GPS was slow as usual, but this might be due to the extremely poor, cloudy, polluted weather conditions we are currently suffering with rather than a technical issue with the phone.

The Doogee Bigboy DG600 is a 6-inch Android smartphone which costs less than $150 for international customers and as such I imagine it being quiet tempting for many users. 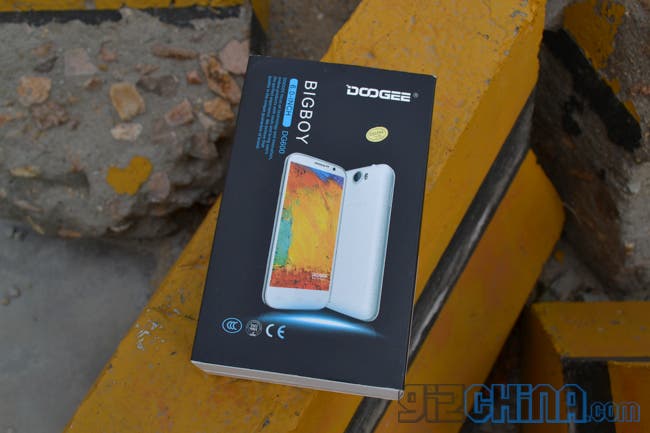 General day-to-day performance is fine, as is the battery life, but the viewing angles of the display, poor camera and heavy weight of the phone really spoil the user experience. Personally if I was in the market for a device for $150 I would go for a phone with similar levels of hardware but a smaller, higher resolution display. 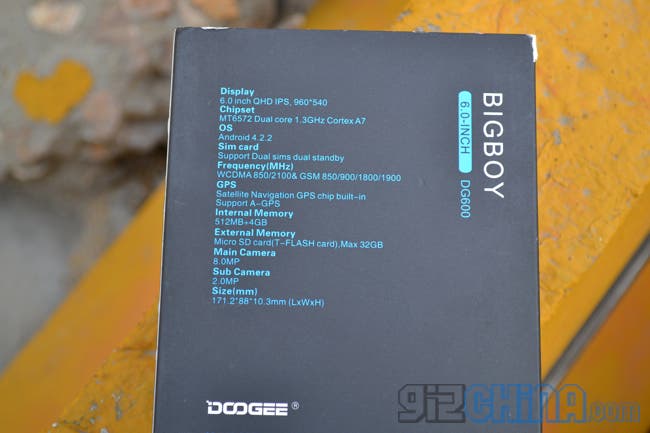 Those of you who still want to pick up the Doogee DG600 might be interested to know that you can save $18 on the phone using the discount code: giz600 which will reduce the phone to just $129.99.

Thanks again to Antelife for sending us the phone, take a look at their product pages for the black and white Doogee DG600 for more details.

Next Huawei preparing 3 new mobile processors including a 64bit octacore chip with LTE!