Hardware startup OnePlus have really started to start the hype machine up over on their Facebook page this week, their latest post claiming that they have created the most attractive phone yet!

OnePlus was announced back in December and in less than a month have announced a partnership with CyanogenMod and hosted a brand launch event in Beijing. Currently to only detail known to to many concerning the phone is that it will have 4G LTE, but other than that OnePlus are keeping tightlipped about everything else. 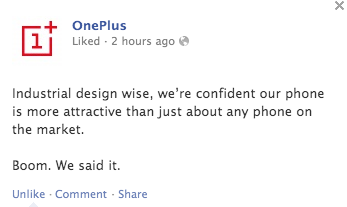 This will the OnePlus Facebook page has sprung to life with explanations behind the name choice, promises that they will deliver a no compromise device, and that they believe that their flagship device will be the most attractive on the market!

Industrial design wise, we’re confident our phone is more attractive than just about any phone on the market.

Boom. We said it.

Next Meizu’s continued partnership with Tencent could be key to a CyanogenMod future!