OPPO Neo, the device that was released in the Indonesian market a few weeks back might soon see a release in India.

OPPO only have one device in the Indian market as of now, the OPPO N1. It is being tipped that the Neo will be launched with a price tag of 11,990 INR (USD 191). Many Indian manufacturers including XOLO, Micromax offer better hardware at around the same price. Considering the above-average build quality on OPPO devices, the OPPO Neo perhaps won’t be too bad a deal for under 12k INR, we think.

The Indonesian version of the phone packs a dual-core MediaTek processor running at 1.3GHz, and has 512MB of RAM, beneath a 4.5-inch FWVGA display. This (512MB RAM and dual-core CPU) is perhaps something which will put off potential buyers, but there are a few other features the device packs which are not usually seen a phone of this cost. This includes a ‘Gloves Mode’ which allows users to operate the device while using gloves, and optimized software in the form of OPPO’s ColorOS. 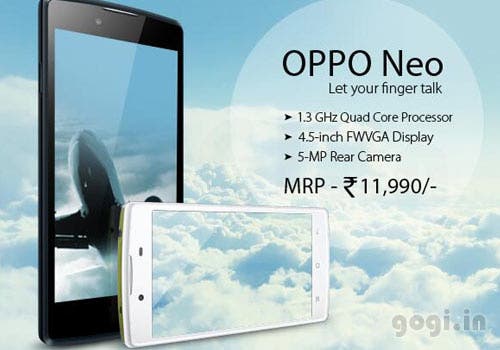 Very strangely, Gogi.in reports that the device will have a quad-core processor. We don’t really see that happening unless OPPO have some real special plans for their fans in India. This is what we have about the OPPO Neo’s India release. Stay tuned for more info!

Next Everything We Think We Know About The LG G3, LG G2 Pro