For those who think that an octa-core CPU is a bit of an overkill for a smartphone, Karbonn Mobiles, an Indian manufacturer has released a 6-core device at a very affordable price point.

Launched in the capital of India a few hours back, the Karbonn Titanium Hexa says it all in the model name itself. It comes with MediaTek’s elusive MT6591 6 core 1.5GHz CPU along with a solid 2GB of RAM among other specifications that will perhaps give potential buyers a choice wider than just the Micromax Canvas Knight. 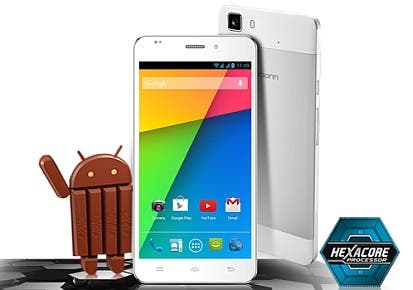 The Karbonn Titanium Hexa packs a 5.5-inch 1920 x 1080p FHD display in the ‘affordable high-end’ category and is powered by a rather disappointing 2050. What’s heartening, however, is the fact that the Titanium Hexa features Android v4.4 KitKat on-board — or the company claims so, at least. Reason why we like it so much is because other MediaTek devices are still lagging on Android v4.2.2, wanting for updates.

Other specifications of the device include 16GB on-board storage, a 13 mega-pixel rear camera and 5 mega-pixel front camera. The Karbonn Titanium Hexa is priced 16,900 INR ($277) for folks in India.