Succeeding the LG G2 is going to be no mean feat, and the G3 looks like its up for the task. The device, which has been in the works for quite some time now, is finally starting to fall prey to the vicious spy cam, besides the perennial rumour mill.

LG conceded that their next big thing would have a 2560 x 1440 pixel display, rivaling the likes of the OPPO Find 7, Vivo Xplay 3S while at it. The G2 had some serious screen to body ratio, and if the G3 is anywhere as close as that, we’ll have a winner in our hands. Leaks and spy pictures, interestingly, paint a picture that does fall in place with the aforementioned desires. 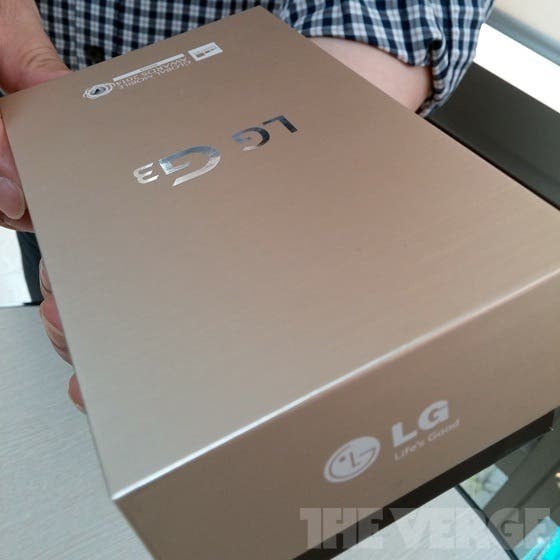 That’s not it, however. The device might also feature a gold variant, The Verge suggests. The leaked picture above clearly shows a gold themed packaging for the G3, which is also expected to be the colour on the front of the device. Of course, it’ll only be one colour variant among (perhaps a few) others, so you needn’t be a bling-lover to be eligible for an LG G3.

With many of the large announcements and launches for 2014 already done in the first half, LG would hope to cash in on the quiet by launching the G3 this summer.

The G2, as we remember, served as a base for Google to design their current flagship from the Nexus lineup, the Nexus 5. There’s no word if the G3 too will be remodeled into a vanilla Android powered Nexus device, however, the coming months should provide a better picture.

Next Official: OnePlus One Release Countries and Regions