This evening Vivo launched their latest smartphone and first ever camera centric device. Here are all the details we have learned about the Vivo Xshot from the launch.

Vivo were quite good about letting their fans know about the Vivo Xshot’s main features and already told us all that their new phone would have a 1920 x 1080 display, 3GB RAM, Snapdragon 801 processor and 4G LTE, but there were still a few surprises during the launch.

First up was the design of the phone, it was obvious the Vivo Xshot wasn’t going to look like the various leaks seen before the launch (no Vivo yet has been the same as leaks), but the design which was shown was a bit of a surprise. Not only is the Vivo Xshot smaller than expected, just a 5.2-inch display, but the look is very different from any Vivo past or present. During the launch Vivo said that they wanted the Xshot to be easy to handle with one handed, and they certainly seem to have achieved that and claim the dimensions match those of a 5.5-inch phone display (we are waiting on actual dimensions).

Being a camera centric phone we were not shocked to see a 13 mega-pixel Sony IMX 214 main camera with 6 lens arrangement and f/1.8 aperture, capable of fast still shots or 4K video. Dual colour LED flashes also take up the rear to help produce more natural colours during night shoots and OIS is on board too, but it is not just the rear that gets a flash the front 8 mega-pixel camera has a single LED too! The front camera also has an 84 degree lens and boasts the usual beauty modes, voice control etc. One standout feature for the rear camera was the “kid mode” which has the Xshot play a sound , a dog barking or cat meowing, to catch the attention of a child, then once facing the lens the camera will take a shot.

Speed of the camera was really driven home during the launch. Vivo claim that the camera will take photos faster than most other devices on the market helping to catch action shots. Also the camera can be activated from the lock screen by simply pressing the shutter button. This way the phone can capture 5 quick photos without having to unlock the phone. 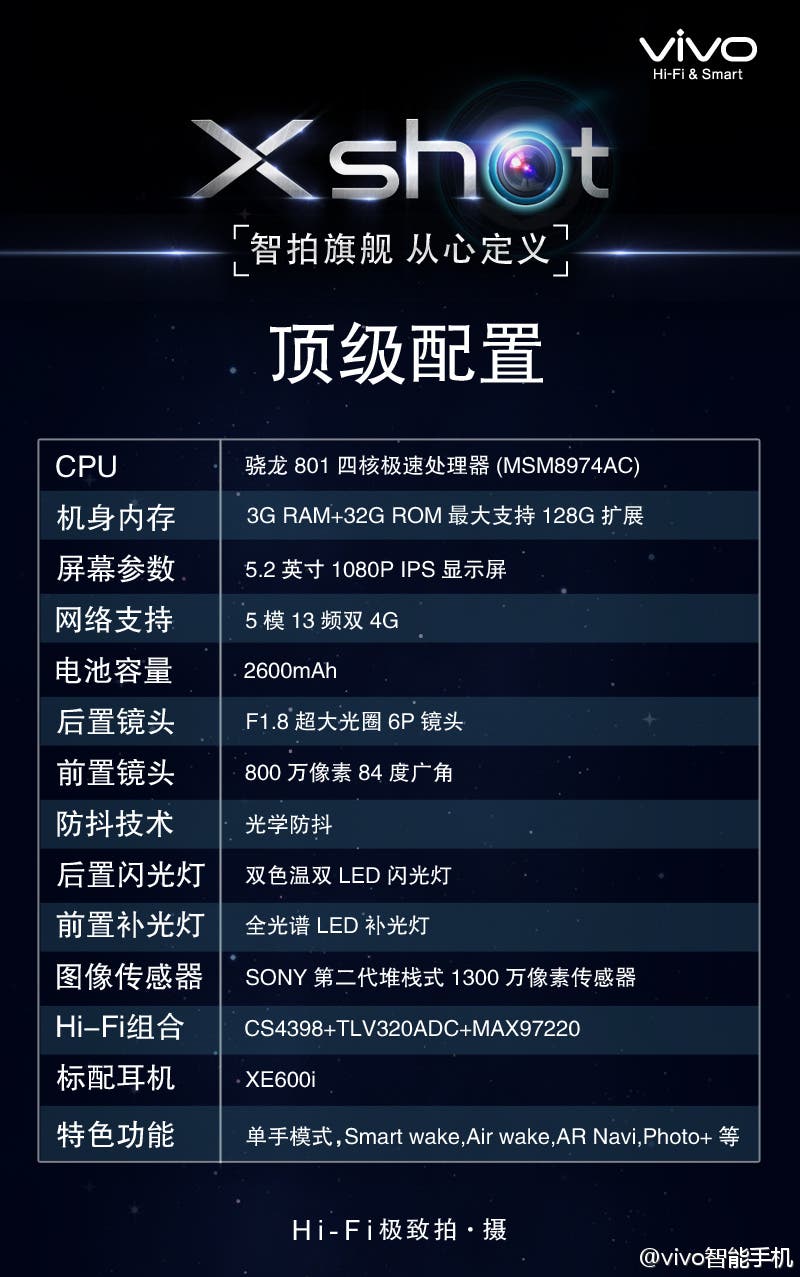 Driving the small 5.2-inch display and impressive camera hardware are the above mentioned 3GB RAM and Snapdragon 801 2.5Ghz processor. Internal memory is 32GB, however you also have the option to use a 128GB SD card in there too. Other hardware features are 4G LTE support (bands not announced yet) and a 2600mAh battery, which is rather small compared to what Oppo and OnePlus are offering. A Cirrus Logic audio chip is on board to keep audiophiles happy, and there is enough video and photo editing built-in not to need additional apps.

Like all current Vivo phones the Vivo Xshot run Funtouch ROM, the retail version will be based on Android 4.4 Kitkat.