Now that the general consumer is better aware of the internals, manufacturers are trying to pull off all sorts of tricks to lure buyers. Something similar we recently saw was Huawei’s claim that the Kirin 920 is ‘faster’ than the current most powerful Qualcomm Snapdragon chipset, the 805.

The Kirin 920 is an octa-core SoC which is expected to power the Huawei Mulan, a smartphone which is expected to be the new Huawei flagship once released. What’s surprising is the fact that an online store on Taobao (you can think of it as a Chinese equivalent of eBay) is advertising the Kirin 920 chipset (minus EVERYTHING else) for well under $20! 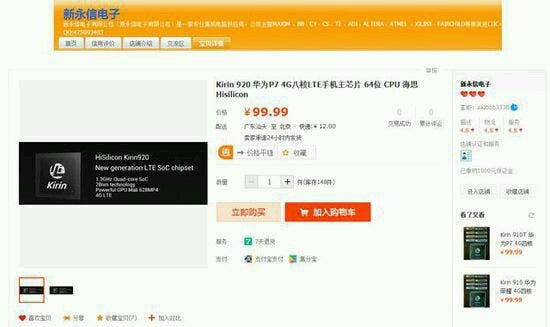 China’s ability to churn out decent hardware at low costs is well known, but one usually would assume that a flagship SoC cost a lot more than a mere CNY 99 or $16, for which it is being advertised. We, however, cannot ascertain the authenticity of the ad at this moment, but with the way things have been moving in China in the recent months, this could well be true.

If it indeed costs just $16, could Huawei roll out a sub-$250 flagship? Only time will tell…