Claiming it to be the world’s thinnest 4G LTE phone, OPPO unveiled the OPPO R3 at an event in their home country of China earlier today.

The device comes with mid-range specifications, but a slim body and 4G LTE capabilities set it apart from the rest. On top is a 5-inch 720p HD display which is now standard for a mid-range phone. Under the hood, the R3 packs the same 1.6GHz quad-core Snapdragon 400 CPU as the Xiaomi Redmi 1S, with even the RAM being identical at 1GB. Storage on board is limited to 8GB, but there’s a microSD slot at your disposal should you feel the need for more. 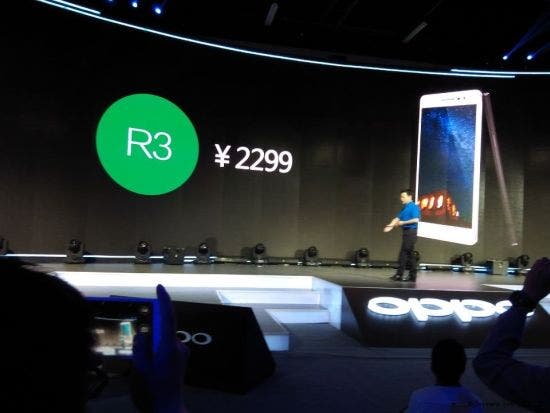 Being an OPPO phone, it but naturally runs the ColorOS, version 1.4. OPPO has again emphasized on the imaging hardware, and included an 8 mega-pixel rear with an f/2.0 rear camera with a selfi-compatible 5 mega-pixel front. The company also mentioned features such as ‘O-video’ and ‘Generous night shot’ revolving around the imaging, something about which we don’t know much yet.

The 6.3mm, 140g phone will pack a 2420mAh battery, which isn’t quite bad considering the slim chassis it fits into.

Priced at CNY 2,299, the OPPO R3 will hit the shelves later this month, following the OPPO N1 mini.