Huawei might soon release a 64-bit Android smartphone, something which has been rumoured to be in the works for months now.

Thanks to AnTuTu, we’re able to get a sneak peek into what might be the specs sheet of the device. The device – Huawei G621 – is expected to feature the Snapdragon 410 64-bit CPU along with other hardware that is surprisingly under powered. Being the first 64-bit Android, we did hope to see better surrounding hardware. However, what you see here might well be a prototype, and the final retail version will likely be more powerful. But yeah, the Snapdragon 410 isn’t advertised as the most powerful chip either; it perhaps makes sense to use it on a mid-range device. Time will tell. 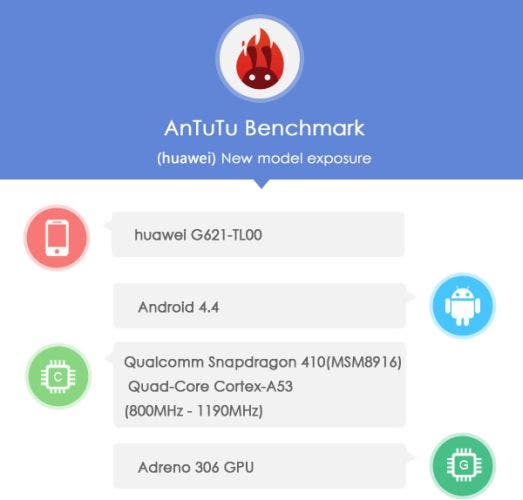 Info from the AnTuTu DB suggests there’ll be a 1280 x 720p HD display (which will likely be replaced by a 1920 x 1080p panel in the end) of unspecified size, 8GB storage, a 2 mega-pixel front snapper and Android v4.4 KitKat on-board (thank God for the shift to KitKat is FINALLY happening).

The Snapdragon 410 SoC comes with a 1.2GHz quad-core 64-bit CPU, with the cores based on the ARM Cortex A53 architecture. It is Qualcomm’s first 64-bit chipset, which makes it an obvious choice for OEMs looking for 64-bit SoC’s right now.

Previous No Xiaomi Redmi Note, no problem! How about a $96 clone?