When Xiaomi ran flash sales in international markets, it was nice to know that a relatively new Chinese maker was getting the attention it deserved. However, in today’s Xiaomi Mi3 sale in India, things went quite out of proportion.

The Mi3 sale was slated to begin 2pm India time, with an unspecified number of Mi3 units on sale. The last time Xiaomi did this, it took them a mere 38 minutes 50 seconds to sellout of their inventory. Sources close to Flipkart mentioned the number of devices — under 10,000 — that it had for sale, which was quite a disappointing number considering that more than 1,00,000 registered for the sale.

What happened today was perhaps something not even Xiaomi expected (or even wanted to happen); within 2 minutes of the Mi3 going on sale, the Flipkart page listed the device as ‘out of stock’. This left customers dejected and outraged, and rightly so. As Deepak Singh of GadgetsToUse puts it, ‘the Xiaomi Mi3 is undoubtedly one of the best smartphones under 15k, which you can cannot buy in India today.‘ 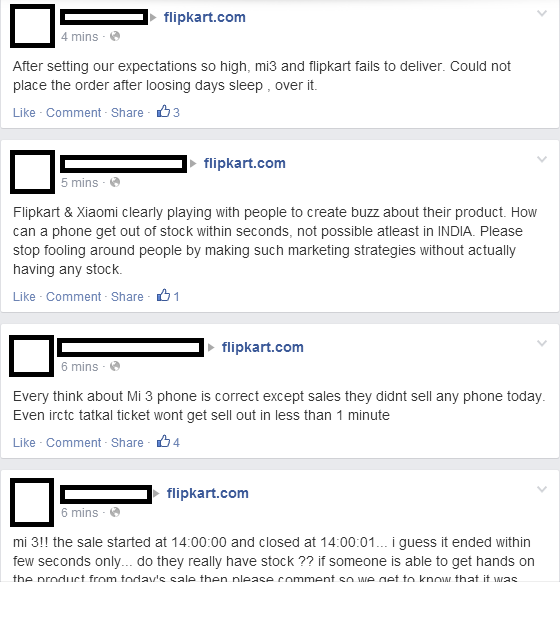 We certainly think Xiaomi need to up their game by a margin if they want to survive in a market as challenging as India, a market where sentiment sits above anything else. Being a manufacturer as large as it is, we really hope they realize it sooner than later.

Next Xiaomi Mi4 sells out in 37 seconds in China