Premium Chinese phone maker Vivo are rumoured to be using the same sapphire glass technology as Apple in their next flagship smartphone.

Vivo are known in China for producing smartphones with the latest design, technology, hardware and features before other phone makers at home or abroad, they were the first phone maker to make a smartphone with a 2K display, and one of the first to make use of a fingerprint sensor in China.

Their current flagship phone, the Vivo Xplay 3S, was announced late last year, and although is still a leading smartphone is due for an update in the coming months. According to Vivo’s own Weibo team the new flagship could already well underway and feature an almost bezels design and a Sapphire glass display. Sapphire glass is also believed to be used in the next iPhone, but who will be first? Vivo or Apple?

Sapphire glass is a hardware feature we will be seeing and hearing more of over the coming months. The tough new glass technology means that a display can be more scratch and shatter resistant allowing for narrower bezel designs. The draw back is the cost of the screens which are much more expensive than current solutions. 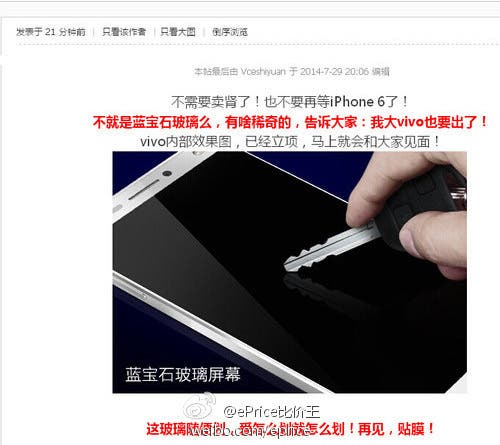 The next flagship Vivo is believed to cost as much as 4000 Yuan and have a display size of just 5-inch. We reviewed the 5.2-inch Vivo Xshot recently and found it to be one of the best Android smartphones on the market today. What’s more the construction is solid as I discovered after it suffered a very heavy drop to concrete today suffering just scratches to the metal frame.

Next Open Thread: Are Xiaomi's designs to close to knock offs for global markets?