Purported leaked images of the Meizu MX4 found on promotional material along with specifications have been leaked this morning.

The photos look to have been taken of either promotional material for the new Meizu flagship or the packaging for the phone.

If the images are genuine then they show is a phone that looks like a variation on the normal Meizu design (a larger MX3?) with a hint of Nubia thrown in for good measure.

Checking out the next on the box confirms that the Meizu MX4 will have a Sony IMX147 main camera. This is a 20.7 mega-pixel sensor that according to the details has a focus speed of 0.3 seconds. The sensor is the same found in the Sony Xperia Z2 and confirms previous leaks. 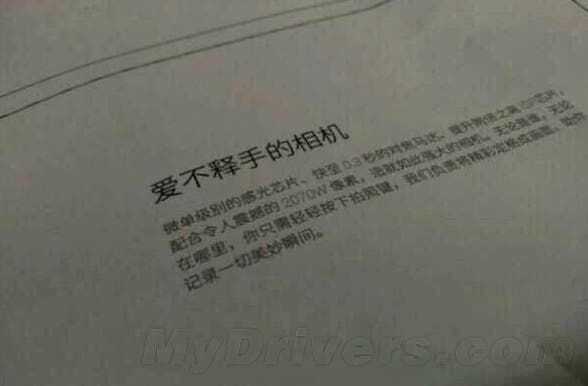 The images also say that Flyme 4.0 will be present (although the screen appears to show 3.0 and 4.0) and the price for the Meizu MX4 will be 2499 Yuan, however as other specs are not mentioned we don’t know if this is the price for the rumoured MX4 Pro and the standard edition Meizu MX4.

Recently Meizu founder Jack Wong told Chinese fans that an announcement for the MX4 would be made on the 18th August. Just a few days to wait and see what it will be.

Previous MIUI V6 announced here are all the details