64Bit fever has spread like wildfire and now we have news of the first Android tablet to get a boost in architecture, the Cube T7.

Packing LTE, the Cube T7 is treading that fine line between a tablet or huge screen phablet, but as Cube are generally known as a tablet maker that’s what we are going to stick with.

At the heart of the Cube T7 is the latest Mediatek MT8752, which is basically the tablet specific version of the MT6752, and just like its smartphone counterpart the MT8752 is an ocatacore chip, with LTE, and running at 2.0Ghz.

Those a are some powerful looking numbers, but the features don’t stop there and also include GPS, GLONASS, support for 15 network frequencies (WCDMA, FDD-LTE, TD-LTE, TD-SCDMA, GSM), dual band WIFI, Bluetooth and 1080p H.256 video.

That’s all topped off with an attractive, slim body measuring 192 x 113 x 9.3mm, and a lot like a flagship smartphone.

Cube will be officially realising the T7 in China through JingDong Mall at a low price of 999 Yuan. Currently the tablet is on preorder only for the next month so we have some time to wait before an international launch. 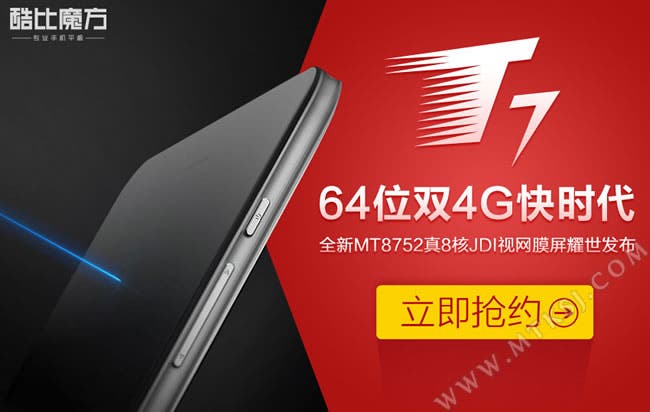 If the T7’s screen is on the small side for you then you could wait for their next device which will also have LTE and a 64bit processor but a larger 9.7-inch display.