Doogee can easily be described as the most active low-cost phone manufacturer from China. Suddenly appearing out of nowhere, Doogee now has an impressive product lineup to show off and is showing clear ambitions towards the European market. One of the most recent Doogee creations is a phone called DG580, with the term “Kissme” thrown in as an attention-catcher. Now, while we aren’t quite sure if we want to kiss this handset, it’s quite obvious that Doogee have been kissed by the OnePlus One. The phone simply is a 100% OnePlus One knock-off, except for the price which is staying on the cheap at only $100. But does being a cheap knock-off make it impossible to be a good phone? Let’s find out! 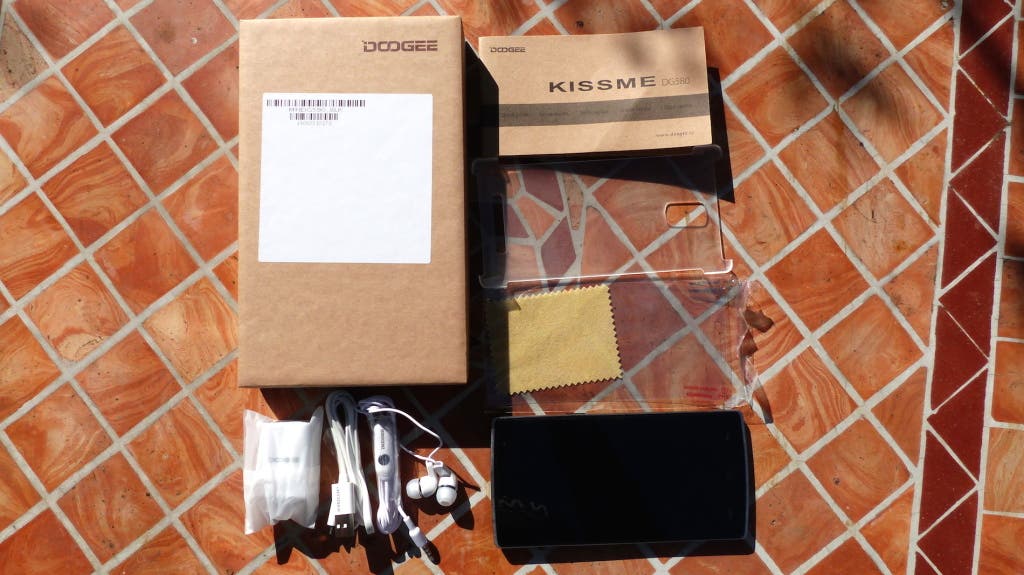 Seriously, packaging styles of cheap Chinese phones are getting boring. Or is it just us? It seems like everyone is now using the recycled cardboard boxes to pack their products in. And so does Doogee. Size-wise it does look quite similar to the packaging of the Xiaomi MiPad, containing the phone, a rear protector, a screen protector, cheap ear buds, a wall charger and a flat micro USB cable.

As for the design, the Doogee DG580 is quite convincing. It’s looking exactly like a OnePlus One, leaving aside the larger dimensions (157 x 79 x 9,5mm) and the higher weight (192g). Considering the pricing of this phone, the build quality is pretty much insane. It’s all plastic, but it feels very nice and solid. Everything is in place, there are no large gaps and nothing’s clattering when shaking the handset. Even more: It feels quite solid and valuable, not like a 100 bucks investment.

We’ve got two units of the Doogee Kissme DG580: The white and the black model. Those two devices don’t have any differences, except the backcover, which is trying its best to imitate the Sandstone Black and Silk White Covers of the OnePlus One. While this is working out well for the black cover, feeling just a little smoother than the OnePlus One’s Sandstone cover, it certainly doesn’t for the white version. This one just feels like plastic with a soft touch to it, yet doesn’t feature the same amazing texture as the OnePlus One cashew-based cover.

To finish this part of the review, let’s have a quick look around the phone. The front is dominated by a large screen with black glass, featuring a front camera and some sensors (status LED missing) on the very top and non-illuminated touch buttons below. On the left, we find a volume rocker, followed by the on / off switch on the right. The “downside” houses a voice microphone, the “upside” a micro USB port (supporting OTG) and the usual 3.5mm headphone jack. Removing the back cover unveils 2 SIM slots (micro + normal) as well as one micro SD slot and the removable battery. 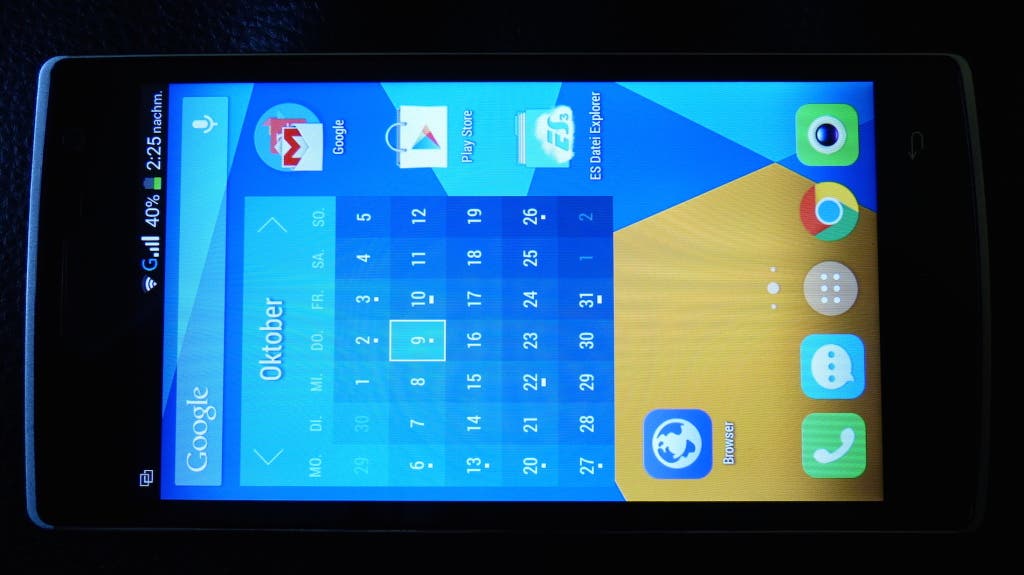 The screen was reason to worry for us, looking at the spec sheet alone. It boasts an impressive 5.5-inches with IPS and OGS technologies thrown in. It’s the screen resolution being quite a let-down at just 960 x 540 pixels. This of course does result in comparably huge pixels and, let’s be honest about that, you notice that especially when looking at high-resolution images or small fonts on web pages. Yet the screen isn’t a total failure, as it is making up for it’s low resolution by featuring a good performance in terms of color reproduction, contrast and reaction times. One thing that could’ve been better though are black levels. 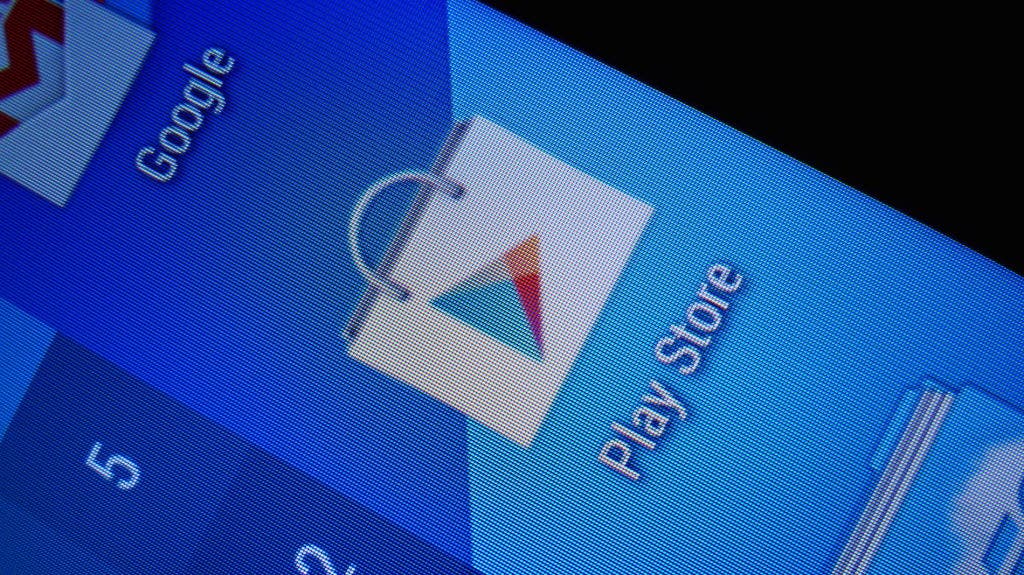 As for the viewing angles there is nothing to complain about. They are as good as they can be with such a panel, showing a minor color-fadeout from certain degrees yet nothing too serious.

The digitizer is working properly, being quite sensitive and fast. One thing we didn’t quite love was the protective film applied to it, which is making moving your fingers across in a smooth motion difficult.

Being equipped with a Mediatek MT6582 1.3GHz quad-core SoC, the Doogee DG580 clearly is a mid-range phone in terms of performance. The SoC is based on the ARM Cortex A7 architecture, which is very energy-efficient. A Mali 400MP GPU is thrown in to provide a smooth 3D graphics performance. Considering the price, we’ve been pleasantly surprised by how well the phone performs. Unless you’re a friend of multi-tasking and high-end gaming, you’ll be perfectly satisfied with how smooth this phone is running and handling older games like Dead Trigger 2. The screenshots below give you an overview about the benchmark results.

The Android 4.4.2 KitKat ROM running on the Doogee Kissme DG580 appeared to be a double-edged sword. While Doogee seem to have done a great job as far as optimization, stability and features go, they certainly didn’t when looking out for bugs.

First of all, the phone does only come with 8GB of internal memory, of which 4GB are usable for media files and 1.18GB for applications. While this is quite enough for simple apps, it certainly isn’t for some decent games. Now, while most phones do offer the option of moving applications over to the micro SD card, the Doogee DG580 doesn’t, which is totally not acceptable for anyone using lots of apps and games. Another serious bug is the pre-installed Doogee launcher, looking similar to MIUI, stops displaying the bar randomly, containing the app-icons that are displayed regardless at which home-screen you are. In the end this means that you can’t open up your phone dialer anymore, if you’d placed it inside of there. Workaround: Install another launcher. Luckily Doogee is offering OTA Updates for the DG580, which means these bugs eventually will be fixed sometime in the future.

But now let’s move on to the positive part. Doogee’s custom ROM for the DG580 does contain tons of features, which you normally don’t find with devices inside this price range. It boasts a large set of gesture features, one of them, enabling you to draw a C on the turned off phone to open up the camera instantly. Another neat feature is the fact, that you can silence incoming phone calls by simply flipping the phone over, or accept phone calls without pressing any button by just holding it onto your ear. Even the execution of certain apps can be secured using a custom password, so none of the folks around you can access your private data. All this is making the handset quite unique within the low-cost arena and is making up a little for the previously mentioned bugs.

We’re keeping this one short now, as there isn’t much to say except that we’ve been quite disappointed with this phone in terms of audio quality. While the internal speaker is way too silent to overcome any noisy environment, the 3.5mm headphone jack’s audio signal does sound way too unbalanced and muffled for it to be anything suitable for serious audiophile pleasure.

Now this is about the most basic feature of any handset: Doing what’s supposed to do, receiving signals. During our test we stumbled upon a few issues here. While we didn’t encounter any signal losses, we noticed that the average signal strength is lower than with other phones. While this doesn’t have any impact on phone calls, it does have for mobile data connections, which are a little slower than usual. Luckily, this didn’t continue with the other wireless features, as both we-Fi and Bluetooth came out to be working perfectly well. Even GPS was working just fine after a longer time of 1 minute for the first fix, with accuracy being in between 2 – 6 meters depending on the weather conditions, even working inside the house when being in front of a window.

Now the feature Doogee’s DG580 has become popular for is Mediatek’s HotKnot. This technology has been put in the race to act as a competitor for NFC. While NFC is antenna based, HotKnot isn’t, which means that phone-makers can realize this feature at a lower cost. To get it working, you simply press the HotKnot button inside the desired app and the phone will create a field on it’s digitizer. Now touch two HotKnot enabled phones together and the digitizer of the second phone will receive the other phones field with its own digitizer, performing a handshake and finally establishing a direct Wi-Fi connection in between the two phones, over which any desired data is then being transferred. During our test this technology did work perfectly fine, and we even did like it more than NFC, as there is no need fumbling around, trying to align the Antennas properly.

You all will probably agree that you simply can’t expect a high-end camera within a low-cost phone. Now the Doogee Kissme DG850 isn’t any exception. It features two 8 mega pixel cameras of which none is quite satisfying. Besides showing nice colors, there isn’t anything positive to mention about them. Images are blurred, noisy and the same applies to videos which in addition have a pretty bad audio quality. Finally the dual-LED flash is the biggest joke ever, as it isn’t even bright enough to even blinding you a tiny bit. They could’ve simply left the LED flash out at all and there wouldn’t be any difference.

Not being a battery monster with only 2.000mAh of capacity, we didn’t expect much from the Doogee DG850. Yet we’ve been proven wrong. While the phone’s battery can’t do any magic, getting through the day with a fully charged cell is fairly easy with a few power saving measures thrown in. For a budget phone this is enough and no reason to complain. Plus, it has the bonus of featuring a replaceable battery. We’ve been a little surprised by the charging time, which is quite long at 2 – 2.5 hours (depending on the charger).

Doogee really managed to create a low-cost handset which is more than just a knockoff. While the Doogee Kissme DG580 isn’t the holy grail of the low-cost market, it still remains an impressive piece of kit with a very low price tag. If Doogee manages to fix the existing software bugs, this could become a very attractive handset for those with a small pocket. But for now you should seriously think about which features you need and which not. There are phones priced at a similar level, being less feature packed, yet free of bugs. You can live with the mentioned flaws? Fine, get yourself a DG580 and enjoy!

Thanks to eFox-Shop for providing us with the two phones.

Next Oppo Find 7 finally gets an official Android 4.4 Kitkat update